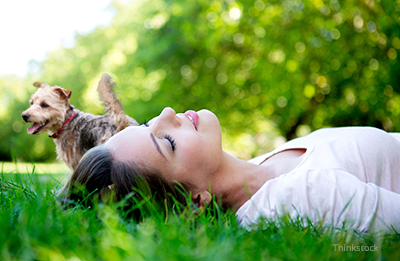 [Editor's Note: We are not encouraging or endorsing trying this and, if you do, DO NOT do it in a place where your dog is free to wander off, get lost or end up in traffic.]

We’d all like to believe our dogs would act heroically when faced with danger. Dashing to retrieve rescue for an injured owner, dragging a helpless child from a burning building or Dialing 911 for a collapsed companion—that sort of stuff.

Well, as seen on BarkPost™ and Buzzfeed, some pet parents are testing their pet’s “superdog” status and videoing the results. Turns out not every dog can channel their inner Lassie and save the day. In fact, most seem pretty perplexed by the whole thing.

The setup
Before I go any further, I want to make it clear that I don’t recommend nor advise what these wanna-be-internet-famous folks are doing. In fact, I think it can be downright dangerous. Here’s the setup: A person is out walking their dog on a leash and pretends to collapse. Video rolls to share how the dog responds when the guardian fake-falls to the ground, feigning fainting. (Say that five times fast.) So how’d the dogs do? Underdog to the rescue?

The results
Not so much. Most of the dogs simply ignored the guardian and continued trekking. One kept walking until you couldn’t see it, and another took the opportunity to hightail it elsewhere. Not a single dog poked, prodded, licked, sniffed or snuggled their guardian. Only one made any attempt to even glance back at their blacked-out buddy. Disappointed doesn’t do it justice.Sometimes, dogs do get upset
As fate would have it, my wife inadvertently conducted a similar experiment last weekend. She was with her yoga class participating in a beach sunrise session. As the group entered shavasana (“corpse pose” or the final deep relaxation stage), a large Boxer-mix and guardian approached. As the class lay on the beach, face up, hands by their sides, not moving, my wife noticed the Boxer abruptly stop. It stared at the group and stared up at its human. The Boxer repeated this back-and-forth attempt to get its oblivious guardian’s attention several times. Finally, the Boxer began pulling toward the group as if to say, “Can’t you see there’s a bunch of dead people over there? Help them!” Needless to say, my wife broke pose and went over to hug her newfound hero friend. Too bad she wasn’t videoing it.

My theory
My personal theory on why these dogs ignored their gaurdian’s counterfeit catastrophe is simple: They knew it was a sham. Dogs are highly intuitive and I suspect they didn’t perceive any real threat signals. I’m holding out hope that my mutts would know when the danger was real or phony and launch into “Sam” from I am Legend on a horde of zombies. I’ll post that video.

A note about safety
If you’re going to test your pooch’s protector status, at least do it in a confined, safe environment. Most of these dogs fled the scene, potentially resulting in unintended tragedy. You should also prepare to be ignored. It seems you can’t fake out a real hero dog.