Tough-Looking Dog with a Heart of Gold: The Boxer

Background
In spite of his name, the Boxer is far more likely to give your face a lick than a left hook!

Boxers were developed as a classic, jack-of-all-trades working dog in Europe. Bred in 19th century Germany as a cross between an English Bulldog and the now-extinct Bullenbeiser (similar to a Mastiff), the Boxer was used for bull baiting, cart pulling, livestock herding, hunting huge animals such as boar and bison, and, unfortunately, dog fighting.

The Boxer was one of the first dogs used for military and police service. In WWI, the Boxer was valued as a messenger dog, pack -carrier, attack dog, and guard dog. It wasn’t until after the Second World War that the Boxer gained true popularity for his gentler side, and became a favorite pet for many soldiers returning home from war.

So what’s with the name? Some say that the name is derived from the breed’s tendency to play by standing on his hind legs and “box” with his front paws. Others disagree, but what is true is this breed is one of the sweetest around! 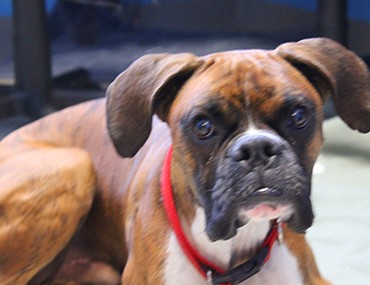 Sizing Up
The Boxer is a medium-to-large sized breed. Here are some common physical traits of the Boxer:

Don’t be fooled by the concerned, slightly sad look on his wrinkly face: Boxers are happy-go-lucky, loving companions!

In spite of his past as a working and fighting dog, Boxers are unusually gentle with children and bond very closely with families and other animals. The Boxer loves to frolic and play, has a ton of energy, and can be a complete clown.

The Boxer is also very athletic, making him a great breed for an active person or family. The Boxer also makes a excellent guard because he can be tenacious like a Bulldog. Highly intelligent, the Boxer makes a strong show dog and is perfect for competitive obedience as well.

The Boxer is prone to a few more health problems than other breeds:

Right for you?
As with any new pet, there are some considerations to make before you welcome an adorable, droopy-faced Boxer into your family:

When trained well and exercised thoroughly, the Boxer can be a great companion for the right person or family.