85,000 Rare Antelopes Perish in a Few Weeks — On Edge of Extinction 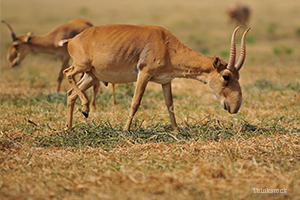 Kazakhstan is a country you’ve probably heard of, but know little about. Located in Central Asia; bordering Russia, China and Uzbekistan; this sparsely populated country was a part of the former Soviet Union. Much of Kazakhstan could pass for the African plains and serves as home to a wide variety of wildlife and exotic animals. It’s also the preferred territory of the endangered saiga antelope; an odd-looking creature noted mostly for its bulbous, drooping snout that appears more whimsical than practical. Reports out of Kazakhstan in recent weeks describe nothing short of wide-scale devastation for this species: An estimated 85,000 saiga antelopes have suddenly and inexplicably died, according to reports published by Radio Free Europe. And that’s only the beginning of this mystery.

The first reports
A few weeks ago, a seemingly minor news story from Kazinform International News Agency broke out of Kazakhstan, detailing the mysterious death of about 100 saiga antelopes. Officials began looking into the case, but weren’t too concerned about it. The die-off was occurring in three northern Kazakhstan regions; habitat to the largest saiga herds. Within days, the saiga fatalities spread to the thousands, and then tens of thousands of antelopes were found dead, according to Stephen Luntz of IFLScience.com. Scientists identified a culprit, but we’ll get to that later. First, it’s worth noting that the saiga species has somehow survived similar extinction threats before.

The last threat to saiga antelopes
Lutz reports that after the collapse of the Soviet Union, Kazakhstan’s wildlife preserves were vulnerable to poachers. In the 1990’s, about three-quarters of the entire saiga antelope population was wiped out by human hunting. That decimation landed the saiga on the endangered list and aggressive international initiatives have protected this incredibly unique animal species. Today the saiga antelope most likely faces a smaller, but just as deadly foe.

The current threat to saiga antelopes
The initial scientific tests point toward a bacterial infection, pasteurellosis, as the most likely cause of death1. [Editor's Note: Pasteurella multocida is commonly found in many species, including dogs, cats and humans. Rarely, it can cause significant disease (with older and sickly animals being at the greatest risk). Pasteurellosis can cause respiratory, nasal and skin infections and is responsible for "Snuffles"— an upper respiratory tract infection in rabbits. Pasteurella is found in the mouths of several animals, and often creates infections and abscesses in cat and dog bite wounds. Most species of Pasteurella are sensitive to common antibiotics, although drug-resistant strains are emerging.]

The mystery isn’t solved that simply though. The questions are:

The answers to these questions are unclear at this time. The saiga population has dipped as low as 21,000 in 20031, and rebounded with our help. The challenge this time is that humans aren’t hunting the saiga, a common bacterium is, and humans have only limited ability to intervene.

Long term, this catastrophic die-off has potentially severe consequences for the saiga antelope. Whenever a species loses this much of its population this quickly, its genetic diversity is significantly reduced. Scientists fear the next generations of saiga antelopes may have additional physical and biological challenges due to this evaporating and altered genetic pool.

Perhaps the mysterious deaths of the saiga antelopes serve as sentinel to another, bigger problem: Global warming and habitat destruction. As temperatures change, species migrate, food and water supplies dwindle and humans encroach on natural environments, we can expect more massive losses of animal species. As a veterinarian and animal advocate, I’m deeply concerned about these issues and encourage all animal lovers to stay informed, get involved and help make our planet healthier and more humane. I’m hopeful for the survival of the saiga and will continue to push for greater emphasis on solving the bigger problems we face both as a species and as inhabitants of our planet.

Click here to learn about the potential loss of other large herbivores to future generations.