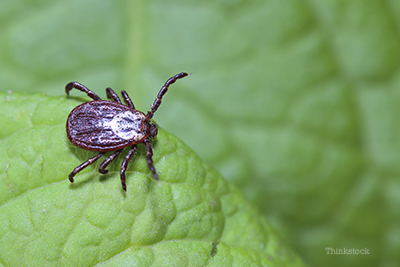 As we enter the warm weather season, it is difficult to remember that just a few months ago parts of our country were experiencing record snow fall totals and cold temperatures. Despite this brutally cold and snowy winter across much of the Northeast and mid-Atlantic, experts say tick populations across both regions will be thriving this summer.
The recent, below-average temperatures aren’t likely to make a dent in the local tick population, says Aislinn Sarnaki of the Bangor Daily News. According to Maine tick experts, “They’ll be out as soon as it warms up.”

Thomas Mather, co-founder and director of the University of Rhode Island Tick Encounter Resource Center says, “…dog ticks are probably up at least a third over what we saw last year [at this] same time." The quote appears in an AccuWeather article by Jillian MacMath. MacMath also reports that Mather’s resource center performs a crowd sourced tick survey across America, and receives between 90 and 150 requests per day to identify different types of the parasite. Mather has said, "What we're seeing over the last few weeks has been a virtual explosion compared to [the] last year of American dog ticks in the mid-Atlantic and New England area."

What diseases do ticks carry?
There are three types of ticks that are of greatest concern in the mentioned regions. They are:

Why didn’t the harsh winter kill off the ticks?
It is likely that this winter's abundance of snow helped to keep the ticks and small rodents warm. Small rodents serve as the host for the immature stages of ticks. Snow works as an insulator from low temperatures.

Meteorologist Ben Noll told MacMath that, "In the mid-Atlantic, it was the second coldest February of all-time in Pennsylvania, 6th coldest in Maryland and New Jersey and 7th coldest in Delaware and Virginia, which also contributed to keeping snow on the ground for long periods of time."

How to prevent ticks from feeding on you and your pet

Click here to learn more about parasite prevention and screening in dogs and don't forget to include regular parasite screening during your dog's regular checkups.