Actually, because of their similar coats, the first Devon was thought to be a Cornish Rex. However, genetic testing proved otherwise. Also, there are some notable differences in appearance between the Cornish and Devon Rex. The Cornish has a uniformly wavy coat, while the
Devon Rex has tight curls. Also, the ears of the Devon are big but set low in his head, whereas the ears of the Cornish are set high on his head.

Imported to the United States in the late 1960s, the Devon Rex is one of the most popular breeds of cat in America.

Cat Facts
There’s a lot to know about the Devon Rex: 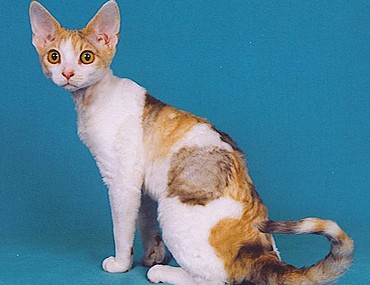 What are they like?
There are few cats friendlier than the Devon Rex. His enthusiasm for life is unmatched, and he loves to be in the middle of everything and absorb attention like a sponge. The Devon is smart, acrobatic, and clownish, meaning he loves to play and is hard to outsmart. Able to amuse and entertain himself for hours, he loves to play fetch!

The Devon Rex gets along really well with other animals and children, and he is both a great travel companion because of his adaptability and a great therapy cat because he loves to be held and touched.

The Devon Rex is a very hardy, well-muscled breed of cat with just a few known health issues: