Background
True to its name, the Norwegian Forest Cat is built to survive Norway’s cold and snow!

With a thick coat of warm, water-resistant fur, the Norwegian Forest Cat is a truly rugged cat. In fact, most experts agree that its ancestors belonged to the Vikings and were used to catch and control vermin on Viking ships. It is also one of the oldest breeds: its ancestors were brought to Norway by Vikings over a thousand years ago and interbred with longhaired cats imported to Norway by Crusaders.

Over the centuries, the Norwegian Forest Cat walked Norwegian forests and farms, honing their hunting skills. In 1938, the first Norwegian Forest Cat club was formed to preserve the breed. However, crossbreeding during WWII almost led to the breed’s extinction. Luckily, another official breeding program saved the breed, which didn’t leave Norway until the 1970s.

The Norwegian Forest Cat wasn’t introduced into the American Cat Fanciers Association until 1994. Today, it’s one of the most popular breeds throughout America, Canada, and Europe. Read on to learn why! 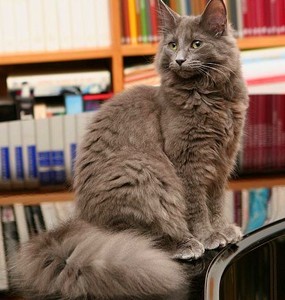 What are they like?
Norwegian Forest Cats are playful, naturally athletic, and love to climb up high and observe what’s going on down below. Even though they’re very hardy and rugged, they’re also very cuddly and playful and are great for families. They are very reliable around children and like to be included in all family events. And though they thrive in the outdoors, Norwegian Forest Cats are equally contented to be indoor cats. Many people consider them a “dog lover’s cat.” And they actually get along very well with dogs, in fact sometimes better than with other cats!

Norwegian Forest Cats also take new situations in stride and adapt very well, meaning they are good traveling cats. They’re very friendly, too! Strangers are usually welcomed into the home of a Norwegian Forest Cat, and they’re well known for their loud, contented purring. Some are big “talkers” and chirp and vocalize much more than other cats.  As a bonus, they don’t require as much grooming as other longhaired breeds like Maine Coons. However, they are heavy shedders at times, especially in the spring.

Norwegian Forest Cats have very few breed-related health issues, but there are a couple to be aware of:

Right for you?
The Norwegian Forest Cat is a great breed of cat for people who have the time to spend with one. Here are some things to think about if you’re thinking about welcoming one into your home: