History
One of the oldest and most recognized cats in the world, the Siamese hails from 14th-century Thailand, where he was favored by the royal Siam family. In fact, the Siam family used to give these cats to visitors of their royal court as gifts, which contributed to their spread throughout the world. This cat was referred to repeatedly in the “Tamra Maew” (Cat Poems), a collection of ancient Thai manuscripts dedicated to cats.

The Siamese began popping up in the western hemisphere in the late 1800s, and the first known Siamese to make it to America was one that was given as a gift to First Lady Lucy Hayes (wife of Rutherford B. Hayes) by the American consul in Bangkok in 1884.

Today, the Siamese is the fifth most popular cat in America.

Cat Facts
There are some pretty cool things you should know about the Siamese:

What are they like?
The Siamese has a big personality!

Playful, curious, and prone to mischief if you’re not around, the Siamese is quite a character. When he’s not exploring new heights and hiding places in the house, the Siamese loves to play fetch, watch television with clear interest, and walk on a leash. The Siamese is often described as dog-like, and he’s a very vocal fellow. Nicknamed “Meezer” because of his loud, low-pitched voice, you’ll often find the Siamese eyeing their owners with a quizzical look before striking up a long, one-sided conversation. 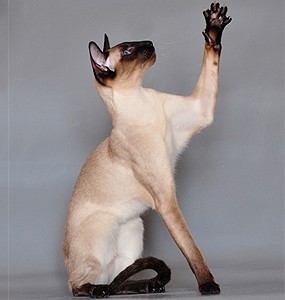 In all seriousness, the Siamese is both intelligent and affectionate and loves to be with his people. He is great around children and gets along well with other cats and dogs, though he might prefer to be the center of attention.

The Siamese is a relatively healthy breed of cat, but he does have some genetic issues to be aware of:

Right for you?
With his beautiful and distinctive coat, chatty manner, and love for life, the Siamese might sound like the perfect cat. However, as with every breed, there are some things to consider before welcoming a Siamese into your family: