History
The Cornish Rex may be a mutant, but he’s also one of the friendliest felines around!

A natural breed and a cousin of the Devon Rex, the Cornish Rex is actually the result of a curious genetic mutation. In the 1950s, a kitten named Kallibunker was born in Cornwall, UK with a strange coat of the curliest, finest hair. Nicknamed “Kalli,” he was the first member of the Cornish Rex breed. Kalli was successfully bred with Siamese, Burmese, British Shorthairs, and others to create a robust, healthy breed known for its outgoing personality.

The Cornish Rex is a pretty neat breed, and here’s why:

There might not be a more outgoing cat than the Cornish Rex. His enthusiasm for life is unmatched, and he loves to be in the middle of everything and absorb attention like a sponge.

The Cornish is smart, acrobatic, and clownish, meaning he loves to play and his hard to outsmart. Able to amuse and entertain himself for hours, he loves to play fetch and has been known to get by without a playmate by tossing his toys with his paws and fetching them himself! 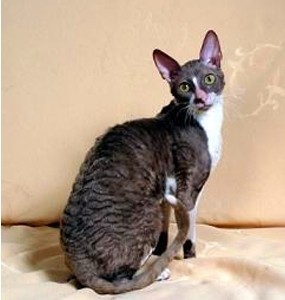 The Cornish gets along really well with other animals and children, and he is both a great travel companion because of his adaptability and a great therapy cat because he loves to be held and touched.

The Cornish Rex is a very hardy breed of cat with just a few known health issues: