Background
The Tonkinese is a newer breed, the result of crossing Siamese and Burmese breeds in the 1960s. Some say that cats similar to the Tonkinese have been around since the 19th century, while others argue that the first Burmese imported to the United States, a female named Wong Mau, was actually a Tonkinese. 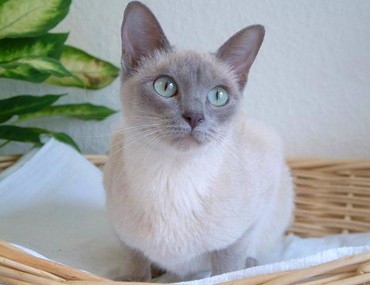 Cat Facts
The Tonkinese might be a new breed, but he’s an interesting one too:

What are they like?
Call him a jokester, call him a trickster, but don’t call him boring!
Highly intelligent with an incredibly sharp memory, the Tonkinese will find his way out of the house or into cabinets and he’ll never cease to impress you with his intellect. Combine his athleticism with his wit and you’ll be hard-pressed to find a more entertaining breed. He loves to play fetch and other games, move around the house with enthusiasm, and make his way up to his favorite perches in the clouds: cabinets, refrigerators, doors, and more.

The Tonkinese is a playful and energetic cat with a crafty side. Full of life, the Tonkinese is outgoing and loves to spend time with his humans. He’ll even act as a door-greeter when you’re expecting company. Great with children, other cats, and cat-friendly dogs, the Tonkinese tops the list of happy-go-lucky cats.

The Tonkinese is a very healthy, hardy cat with no specific health problems.

Right for you?
Here are some things to think about if you’re considering welcoming a Tonkinese into your family: