Background
The Burmese first appeared on record when a small brown cat, nicknamed “Chocolate Siamese,” was brought from Burma to England in the early 1900s. Similar breeds date back to the 16th century in Thailand, although at the time the breed was called “Copper.” All Modern Burmese are thought to be descendants of these copper colored ancestors. It’s possible they were stolen from Thailand when the Burmese invaded in the 18th century, but this can’t be confirmed.

The reappearance of the breed occurred in the early 1930’s, when a small brown Burmese origin female, named Wong Mau, was crossed with a seal point Siamese male by Dr. Joseph Thompson. His intentions were to produce a Burmese-Siamese, known today as the Tonkinese. However, among the offspring were some dark glossy brown cats, which had taken many of Wong Mau’s characteristics. These came to be the revitalization of the Burmese line.

In the years since the line has been besieged by controversy. They are often confused with the Siamese and Tonkinese breeds. Both America and England have set their own standards for what qualifies as Burmese. Currently the English standards are used around most of the world.

Although traditionally brown, Burmese cats have been bred in a wide variety of colors including lilac and cinnamon. 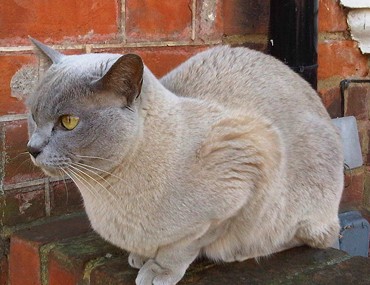 The Burmese cat loves to entertain, whether it’s trying to have a conversation with you or leaping to the highest point in your house.  This breed is extremely playful even into adulthood. They are also super affectionate and love to snuggle up with you.

Burmese are very active cats. As kittens, they’re often very clumsy but much like us, it’s how they learn to walk straight and build up their strength. They love to act as your shadow: wherever you go, they’re right there next to you.

Health concerns for the Burmese can include cardiovascular conditions such as dilated cardiomyopathy. Also, Burmese can be prone to some skin conditions or musculoskeletal conditions but these are both very rare.