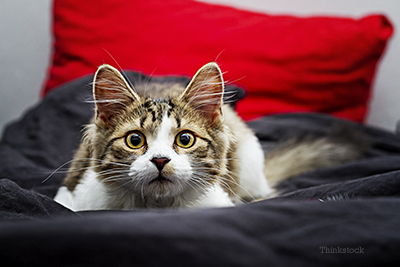 Best be careful about what kinds of noises you make while in the presence of your kitty. This is because some cats, like some humans, suffer from seizures that are triggered by particular noises. A recent study, published in The Journal of Feline Medicine and Surgery, characterized noise-induced seizures in cats.

The research
According to NBC News, The study researchers included:

This trio refers to the phenomenon of noise-induced seizures in cats as “feline audiogenic reflex seizures” (FARS).

Here’s how the study worked1:

Results
Breeds affected with FARS ran the gamut, including:

From a statistical point of view, Birman kitties appear to be overrepresented. This suggests a possible inheritance within this breed1.

Results revealed that sound-induced seizures were more common in older cats, with an average age of onset of 15 years. Seizure activity varied from mild twitching, all the way to loss of consciousness and full body muscle contractions1.

Now here’s where it gets really interesting! All guardians felt they could consistently induce a seizure by making one of the described trigger noises. In fact, for some kitties, the louder or longer the noise, the more severe the seizure.

Treatment
For many of the cats, successful avoidance of exposure to trigger noises completely eliminated seizure activity. Of the 96 kitties, 44 were treated with anti-seizure medication. One drug in particular, levetiracetam (now that’s a mouthful) seemed to be the most effective at controlling sound-induced seizures1.

What causes FARS?
It isn’t understood why some cats experience noise-induced seizures. Paradoxically, deafness (or hearing impairment) was reported in half of the cats studied1. The researchers have proposed more studies to learn more about this unusual feline syndrome.