Ever watch a YouTube video that makes you laugh out loud? Then after you laugh you think, “Wow, that was really stupid and really dangerous.” The more you think about the footage, the guiltier you feel for watching the stupid thing in the first place and the more lethal outcomes you dream up. I just had that reaction after watching the latest video from Polish prankster SA Wardega.

[Editor’s Note: The video linked below depicts graphic, albeit fake, acts of violence. Do not follow the link if you are uncomfortable viewing this kind of video. Furthermore, any other content posted under this YouTube account has not been vetted by Dr. Ernie Ward or Pet Health Network.]

The video is called “Mutant Giant Spider Dog.” It was funny, stupid, and more than a little risky.

The spider/dog video
If you haven’t scored one of the almost 58-million views of this insanely viral video, don't feel bad. Wardega’s main claim to fame is his secretly filmed creepy-but-comical gags. Think smashup between “Candid Camera” and “Twilight Zone.” He also stages highly inappropriate scenarios on unsuspecting Poles so be forewarned if you’re watching at work or around children.  Anyway, the “Mutant Giant Spider Dog” video opens on a darkened street with, what else, an orc taking his enormous arachnid for a midnight stroll. “Isc (Go!)” The orc growls and releases his arthropod into the night. Weird so far, but I’m wondering where the “dog” comes in.

It’s a dog in a spider costume, get it?! A Mutant Giant Spider! And that’s the joke: A dog dressed as a spider springs on friends, lovers, and loners in the middle of a pitch-black night. Someone opens the door to their apartment building and out runs the spider/dog. Shock! Screams! You giggle. The funnies progress to more elaborately evil scenes: dangling corpses from trees, bloody body parts strung in eerie underground corridors, and a bloody elevator act. Dupes are startled when the spider/dog dashes toward them and they fend and flee for their lives. And that’s when I realized that maybe this wasn’t so funny after all. It was potentially downright dangerous.

What you should know about me: I’m a bit of a prankster myself. Not at Wardega’s level, mind you, but I’ve been known to drop a whoopee cushion on an innocent vet tech or three.

Another fact about me: I love to hate “America’s Funny Home Videos.” In other words, I’m Wardega’s target audience. But I’m also a veterinarian who knows when a line has been crossed.

The dangers of using animals for online videos
In general, I don’t approve of animals being used as the fall guy for human high jinks. Animals can’t agree (or disagree) with the setup and can’t instantly adapt or yell, “It’s a joke! I’m really a dog!” if things go sideways. My first concern is always for the safety of the dog/spider. I’m truly amazed someone didn’t hit, kick, or throw something at the spider/dog. 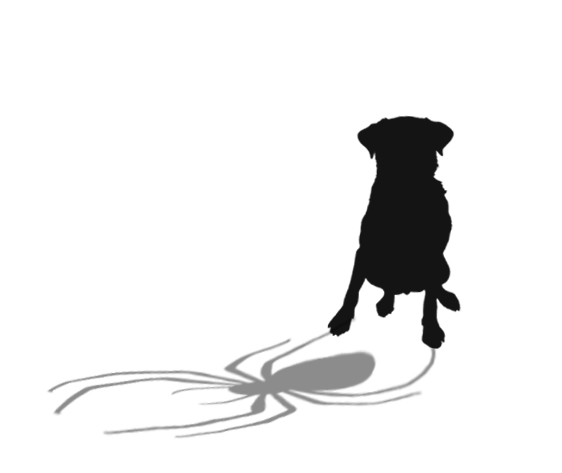 I would’ve. And that’s another hidden risk of these types of videos: We really don’t know that someone didn’t try to squash the spider/dog. Again, I would’ve. Not the dog, the spider. Get it?! Hilarious!

Next time I suggest Wardega stick to dressing up people as weird creatures if he wants to tape his tomfoolery. It’s not worth gambling with an animal’s wellbeing for mere human internet amusement. At least he ends his spider/dog demo with a daylight shot of the forementioned dog/spider (Get it?! Hilarious!) frolicking in a park toting its tentacles. I can report the dog certainly looks happy and unharmed after its “mutation.” Let’s hope Wardega and other amateur auteurs read this and rethink their approach to appropriate animal usage. I know I undoubtedly sound overly protective and negative, and I probably am. Still, I don’t want to see a trend of using animals as props in hypothetically hazardous videos such as this. I really don’t want to have to say, “I told you so.” Besides, there aren’t any real orcs, are there?