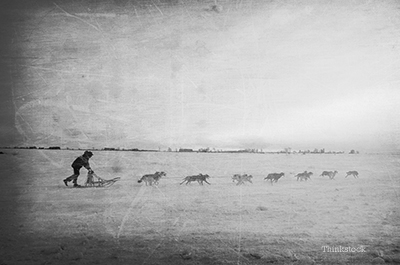 Dr. Phil Zeltzman is a traveling, board-certified surgeon in eastern Pennsylvania and Western New Jersey. His website is www.DrPhilZeltzman.com.

This is one of the most extraordinary dog stories ever told. In fact, few people have heard the entire tale. The French army recently opened confidential archives, untouched for almost a century, for the benefit of a documentary*.

December 1914: the French and Germans are fighting World War I in the Vosges, low mountains on the eastern border of France. Men and horses are struggling in the snow.  Bringing supplies, food, ammunition, and evacuating wounded soldiers, has become impossible because of heavy snowfalls.

Officers need to find a way to avoid the same disaster during the following winter. A crazy idea emerges: wouldn't it be easier to use sled dogs to transport food, ammunition and wounded soldiers? By July 1915, a secret mission is launched. The goal is to find 400 sled dogs and their gear in a mere four months, before winter starts.

The search for sled dogs
Louis Joseph Moufflet, a 46 year old captain, is in charge of the daunting task. He recruits René Robert Haas, a 36 year old lieutenant and experienced musher (i.e., he could drive a dogsled), as his right arm. Both men had lived in Alaska.

The officers’ first step is to find a boat as soon as they arrive in New York City. However, because President Woodrow Wilson’s United States is a neutral territory, nobody is willing to get involved in a military operation. Finding a boat is therefore placed on hold.

The two men each go on their own mission. Moufflet goes to Quebec City to find 300 sled dogs, while Haas travels to Alaska to find another 100. They have three months left.

The challenge is to pick dogs that can lead, follow orders and find their way in a blizzard. After countless trials and tribulations, the Officers ended up finding 440 dogs.

Moving the dogs
Haas’ dogs are transported by boat from Nome, Alaska, to Vancouver, Canada. A train then takes them through Canada, from Vancouver to Québec, via Calgary and Winnipeg. Haas and his dogs barely avoid several poisoning attempts by German spies.

In Québec City, Haas and Moufflet meet again. The dogs are hidden in a hangar while the officers look for a boat to France. By chance, the hangar was located next to an explosive-testing facility. This enabled the dogs to get used to explosions.

Again, finding a boat was a major challenge. By a stroke of luck, they found an old boat in Quebec. Amazingly, the boat is the LAST one to leave Quebec City this winter of 1915, before the St. Laurence River froze over. They cross the Atlantic Ocean, in spite of storms and German U-boats (of Lusitania fame), and reach Le Havre, France, on December 5, 1915. During a severe storm, four dogs die. Amazingly, they will be the only casualties during the entire mission.

But this is no time to rest! As soon as they complete their 6,000 mile journey, the officers need to train the first French mushers for their new jobs. The dog-human teams went on to help win multiple battles.

Sadly, half of the dogs died during combat. For the first time, dogs were decorated, like human officers, with the Croix de Guerre—a coveted medal given to soldiers who distinguish themselves by acts of heroism during combat.

Almost a century later, the canine heroes’ offspring are still running around in France.