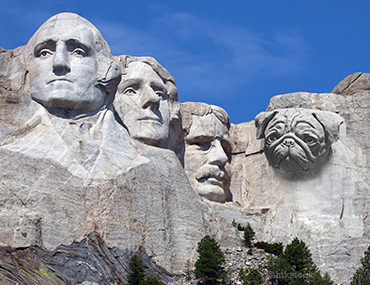 Presidential dogs
February 16 is President’s Day and my thoughts turn to Presidential Pets. We all know of Bo, the Obama’s Portuguese Water Dog; Barney the Bush’s Scottie and probably also of Fala, FDR’s beloved Scottie, who is the only Presidential Pet to have a statue erected in his honor. But is it true that every President had a dog in the White House? No. Some of the Presidential dogs are quite notable though: George Washington developed the American Foxhound1 and Thomas Jefferson helped bring the Briard to America2. President Kennedy’s dog Pushinka, a gift from Nikita Krushchev (Premier of the Soviet Union) was an offspring of Strelka, the first dog into space and back3.

Presidential cats
Abraham Lincoln was the first President known to have a cat in the White House4.

Presidential birds
Surprisingly, birds have been more popular—songbirds, canaries, parrots, eagles and even a turkey have graced the White House. Seventeen Presidents have had birds, though there haven’t been any since Lyndon & Lady Bird Johnson had lovebirds5.

Who had the most pets?
Theodore Roosevelt had many pets in the White House. JFK had a lot as well4, though Roosevelt had many more exotic species—including a lion, hyena, wildcat, coyote, five bears, two parrots, a zebra, a barn owl, a lizard, roosters, a hen, a pig, and a raccoon. Calvin Coolidge actually had a zoo at the White House that included a pigmy Hippo, a wallaby and a black bear—all gifts from foreign dignitaries. The President with the strangest pets was probably John Quincy Adams who kept silkworms; he also kept an alligator in a bathroom and brought it out occasionally to scare guests. Herbert Hoover’s son also had two alligators that roamed the White House grounds at times, but no other President had silkworms5. [Editor’s Note: Large exotic animals are dangerous and are much more comfortable in their natural habitats. They don’t make good pets.]

Although most people don't have exotic animals as pets, the Presidents and their families are not much different than the rest of us. Most of us feel that our families would not be complete without a pet.

For more information about Presidential Pets check out these books:

And of course be sure to visit the Presidential Pet Museum in Williamsburg, Virginia the next time you are in Washington D.C.