New Hope for People and Pets Affected by Domestic Violence 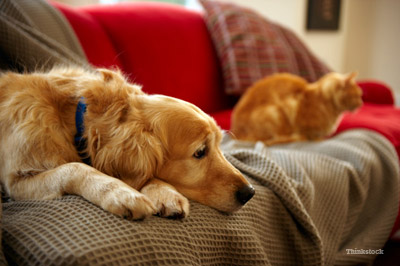 Domestic abuse is widespread and often unreported. More people may flee the abuser if they had somewhere safe to escape, with all of their family members, including beloved pets. For this reason, non-profit Urban Resource Institute (URI) in New York City initiated a test program in 2013 for people to co-shelter with their pets —  safe from domestic abuse — called URIPALS.

Has URIPALS helped victims of domestic violence?
Based on a study conducted last year, residents fleeing abuse overwhelmingly said that URIPALS not only allowed a way out, the program provided families a way to stay together, as pets are indeed considered members of the family. Having their pets with them served as a kind of therapy.

Expanding URIPALS to help more victims of domestic violence
Last October, URI hosted a round table discussion with various experts in the fields of domestic abuse and animal welfare to discuss the positive outcomes of URIPALS, as well as have a frank discussion about any shortcomings. URI seeks to expand URIPALS both in the Big Apple, and also to use the innovative program as a model for other cities because most shelters don’t allow for co-sheltering with animals.

“Replicating URIPALS will save lives,” said Allie Phillips, Lansing, MI-based founder of Sheltering Animals & Families Together (SAF-T) and author of Defending the Defenseless: A Guide to Protecting and Advocating for Pets. “About two-thirds of homes have a pet; if a shelter is unable to accommodate a family with pets, they are not able to serve potentially two-thirds of their community.”

Here’s why: There are 164 million pet dogs and cats in America (American Pet Products Association National Pet Owners Survey, 2015-2016); 65 percent of all homes have a pet.

Pets are ubiquitous, so it’s no surprise that pets are also in homes where’s there’s domestic violence, which is also ubiquitous. One in five women and one in seven men have been victims of severe physical violence by an intimate partner in their lifetime, according to the National Coalition Against Domestic Violence. In 2012, U.S. state and local child protective services received an estimated 3.4 million referrals of children being abused or neglected, according to the U.S. Department of Health and Human Services Administration.

New York shows support for URIPALS
Marie Philip, deputy commissioner of the Office for Domestic Violence, New York City Human Resources Administration said, “We are in need of innovative programs to give people whatever helps to encourage them to leave an abusive situation, and URIPALS does just that.”

“Abuse often begins when the abuser practices on the family pet,” Phillips added.

Pets are victims of domestic violence too
It’s actually quite common to find that where child and/or spousal abuse exists, there may also be animal abuse. Abusers sometimes use the pet as a sort of bargaining chip — threatening to do harm to the pet. People are reluctant to flee an abuser when the pet is threatened. “Abuse is about doing physical harm, but abuse is also about control,” said certified dog trainer Mikkel Becker of Seattle, WA

“We’re experts on housing people, not pets,” said Fields. “We couldn’t have done this without partners. “They include the ASPCA (American Society for the Prevention of Cruelty to Animals) who lent pet behavior advice for URIPALS protocols and policies, as well as spay/neuter and basic veterinary needs for the dogs and cats moving into the shelters. Purina began as a partner to help provide pet food, as the company became more involved they even financed a dog park at a sheltering facility.

Can places like URIPALS help people without pets?
Aside from keeping the entire family together, which is especially important for children, pet shelter housing has proved valuable, even to residents who don’t have pets. Dr. Kurt Venator of Purina isn’t surprised. “Numerous studies demonstrate that pets elevate mood, releasing feel-good hormones, like serotonin and oxytocin,” he said. “Having a dog encourages physical activity. Put simply, pets support health and healing.”

“Pets also provide companionship and stability to adults, but especially children, who have often re-located to another part of town when they move into a shelter,” Phillips added.

Is URIPALS good for pets?
“Not being able to take the pet [to a domestic abuse center] means some animals land in the shelter,” says Jane Hoffman, president of the New York City Mayor’s Alliance. “Being able to find a shelter that allows a pet obviously keeps a family together [and] means that victims are more likely to flee the abuser, which ultimately allows people to begin their lives again, and in some cases saves a human life.”

Steve Dale, a contributing member of IDEXX’s Pet Health Network team, is a certified animal behavior consultant, and co-editor of “Decoding Your Dog,” authored by the American College of Veterinary Behaviorists,” and is host of several pet radio shows. Steve’s blog is www.stevedale.tv
Read more >