The Shiba Inu dates to as far back as 300 B.C. when there were six Japanese breeds, each named for the region where they originated.  The Shiba Inu was the smallest of the six breeds and used to scare small game and large game from the brush. “Shiba,” could have been either a reference to the size of the dog or to the brush they hunted in.

During World War II the Shiba Inu was nearly driven extinct as a result of food shortages and general chaos. The Shiba bloodlines took another hit in the 1950’s when an outbreak of distemper rampaged through Japan. After these events only three lines remained and they were crossbred with one another creating a modern day Shiba Inu.

The breed was brought into the US by a military family in 1954 but the first litter didn’t appear until 1979. The American Kennel Club recognized the breed in 1993. 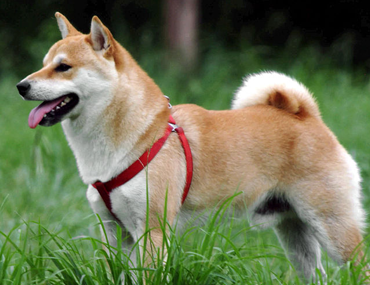 The Shiba Inu is sometimes compared to a cat. He’s shy around strangers, independent, headstrong and always wants to be the center of attention. He’d like to have whatever is in your hand, and expects dinner to always be on time.

The Shiba Inu is notorious for his shrill bark, but don’t let his protests stop you from being assertive during training. He requires early socialization and strict boundaries to grow into a well behaved dog.

The Shiba has a need for daily exercise, but after that he’ll be calm in the house, making him a great family dog.

The Shiba requires brushing at least once a week and more if he’s shedding.

Several health issues might be more likely to occur in the Sheba Inu: