Background
The Keeshond—national dog of the Netherlands—shares blood ties with the Samoyed, Chow Chow, Norwegian Elkhound, Finnish Spitz, and the Pomeranian. He once worked as a watchdog on riverboats and on family farms. The Kees became highly popular in the 1700s and a mascot for the Dutch Patriot political party. The party’s leader, Kees de Gyselaer, is credited with naming the breed after his own dog.

The Keeshond was recognized by the American Kennel Club in 1930. 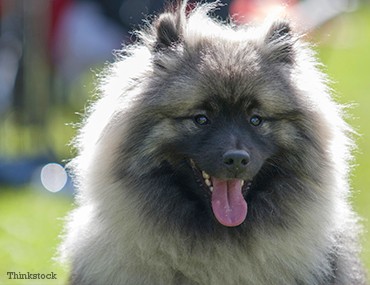 What’s the Keeshond like?
The Keeshond is a happy, loving, playful pooch. He will want to spend plenty of time with his family and is great with kids. He likes to stay active but only requires a moderate amount of exercise; a nice walk or a game of fetch will make him happy. Due to his size, the Kees is highly adaptable to many living conditions. However, he is a barker and likely to put security ahead of your neighbors sleeping needs.

The Keeshond is a smart dog but he has a stubborn side. You should train him at a young age and be firm and consistent. Keep sessions quick and engaging because he does tend to get bored easily. With patience, treats, and praise you’ll have a well trained dog!

At first glance it may seem like grooming a Keeshond would be time consuming, but it’s easily manageable if you give him a good brushing about twice a week.

Because of how long his coat is he can be sensitive to the heat and shouldn’t be left outdoors without shade.

Health
The Keeshond is typically a healthy breed but potential conditions include: