The Scottish Terrier originates in Scotland and England where he was used to quell vermin on farms. Terrier bloodlines weren’t well documented at the time, as farmers were not interested a dog’s lineage, only in his abilities. In fact, terriers weren’t even grouped separately and were all placed into a single breed category.

In 1877 the Live Stock Journal started a heated debate about what qualified a “true Scottie.” The debate led to a submission from Gordon Murray. Murray wrote down criteria for what he viewed as an ideal Scottish Terrier. Three years later J.B. Morrison drew up a breed standard based on that criteria and the Scottish Terrier as we know him today was born.

The first Scotties to enter the United States were Tam Glen and Bonnie Belle in 1883. A year later Scotties were introduced to the American Kennel Club.

Scottish Terriers are the only breed to have lived in the White House on three occasions: President George Bush, President Roosevelt and President Eisenhower. 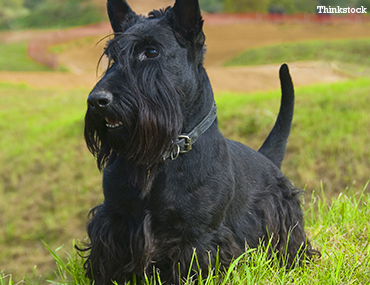 The Scottish Terrier is nicknamed the “Diehard,” and that should give you some indication of his personality. He’s independent, feisty and not afraid to stand up for himself. He’s always ready to play and to chase. Remember that his preferred game is small animals, so keep the family hamster far away.

The Scottish Terrier has a long standing history as a working dog and will require exercise every day. Anything less could lead to obnoxious levels of barking.

Try and find a Scottie whose personality matches your own, start by talking with the breeder. If you’ve found one with experience - and we hope you have - the breeder can help guide you to the perfect fit.

A disease known as “Scottie cramp” is a hereditary disorder which affects this breed. It’s caused by a brain defect and makes it difficult for the Scottish Terrier to walk.

Scottish Terriers also seem to be at a higher risk of cancer than other purebreds.