The Pekingese was long revered in China for his lion like appearance. All that remains of his original breeding lines are stories and legends. The truth is we’ll never know the origins of this breed. What we do know is that during the T’ang Dynasty the Pekinese was only ever owned by royalty and that stealing one was punishable by death. Recent DNA testing has also shown the Pekingese to be one of the most ancient dogs.

In 1860 during an encounter between Britain and China, British forces sacked the palace of Emperor Xianfeng and looted five Pekingese dogs. One of those dogs was given to Queen Victoria who named it Looty. More imports were smuggled out of China after that and the breed’s popularity rose steadily. They were eventually gifted to the Americans and then to the Irish.

The American Kennel Club recognized the Pekingese in 1906. Although he has never been as revered as he was in China the Pekingese has become moderately popular. 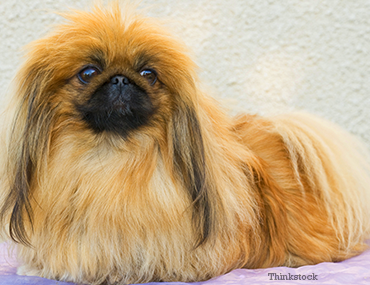 The Pekingese still remembers his regal days. He can be demanding at times, and expect him to try and rule over any other pets you might have. He’s definitely an indoor dog but will expect a daily stroll assuming it’s not overly hot out. Keep in mind that the Pekingese can quickly succumb to heatstroke and needs air conditioning when the temperature rises.

The Pekingese might be aloof around strangers but could come around, so long as those strangers are pampering her. Generally they’ll like children if they’ve grown up together.

The Pekingese might be small but don’t be fooled. She’s tougher than she looks and has more stamina than you would think. She can compete in dog sports and is happy to stretch her legs.

Training can be difficult considering the Pekingese wants to be the one in charge. It requires consistency and dominance. Positive reinforcement is always going to get you much further than harsh words. Expect results from your Pekingese and you’ll be amazed at what she can do.

The Pekingese was bred to be a household companion and she’s friendly, affectionate and comforting around her family. She’ll be a friend when you’re feeling down and snuggle with you on the couch.

The Pekingese’s flat face has led to breathing problems and overheating. For this reason the American Kennel Club changed the breed standards, which had initially included a flat face. There are several conditions to be aware of when adopting a Pekingese: