The Akita was first bred in the northern region of the island of Honshu in the Akita prefecture. The climate in this area was very cold and harsh, and the Akita was bred as a hearty hunting dog. He hunted bear, deer and boar primarily. Akita’s often worked as a team with the leader taunting prey and the follower nipping at the back of it. Together they distracted large game until hunters could catch up and kill it.

In 1927 the Akita-inu Society of Japan formed, their mission being to preserve the Akita as a Japanese breed. The Akita has also been designated a national monument in Japan.

The breed was nearly completely destroyed during World War II, when the Japanese government declared all non-service dogs should be culled for their meat and fur. The only way for owners to protect their dogs was to release them into the wild. Many Akita dogs interbred with wild dogs or with German shepherds during this period of time.

The breed was revitalized after WWII, both in Japan and in America. The first Akita in the U.S. had been brought in by Helen Keller just prior to the war. She was gifted the dog in Japan after she spoke publicly there. Although her first dog died of distemper a second was sent from Japan and lived with Helen for years. After the war Akita dogs were brought back by soldiers and were generally of a color that the Japanese found to be unacceptable. Even today many American color standards are not allowed in Japanese competitions

The Akita’s loyalty is legendary. In 1925 a dog named Hachiko waited at a train station for his owner to return from work, as he had always done. Sadly, Professor Ueno of Tokyo had died at work and never came back. Hachiko waited for the train everyday for the rest of his life, hoping the professor would return. A statue was built in his honor after Hachiko died. 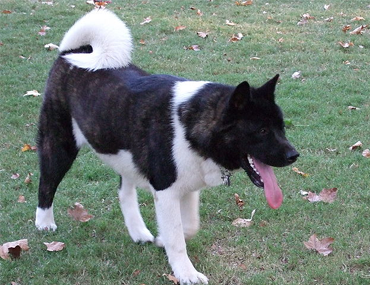 The Akita is a quite dog, but bold and assertive. He’ll bark only when he feels it’s truly warranted and will fiercely protect his family. The Akita will not be interested in strangers and potentially aggressive around other dogs, especially of the same sex. It would be wise to keep the Akita on a leash when he’s being introduced to strangers of any species. Proper socialization can reduce outbursts.

The Akita is affectionate towards children in his family but he can be confused by playful screams and might act to protect them in situations which don’t warrant it.

The Akita needs healthy amounts of exercise every day and can certainly tolerate cold conditions. He won’t follow family members around but he will want to know where they are at all times.

The Akita wants to be the pack leader so training him will require a firm hand and constant reinforcement. He’s also intelligent, so creative games and engaging interactions are a must. The Akita does well with clicker training.

No breed is without its own set of health concerns. In the case of the Akita he’s especially sensitive to immune disorders such as progressive retinal atrophy. There are several other conditions to watch for: