The Chinese Crested is more likely a native of South Africa than China. They’re called “Chinese,” because Chinese sailors carried them on their ships throughout the 13th century. At that time the Crested was used as a ratter.

The Chinese Crested is actually available in two varieties: the hairless Crested has hair on his head, tail and feet. The Powderpuff is covered by a soft, straight, double coat. Both types could be born into the same litter because hairlessness is simply a genetic mutation.

The Chinese Crested wasn’t seen in Europe until the 18oo’s when he became a common subject of well respected painters. Later in that century the Crested won the affection and admiration of Ida Garrett, who wrote about the breed for 60 years and was of pivotal importance to having the Crested recognized by the American Kennel Club in 1991. 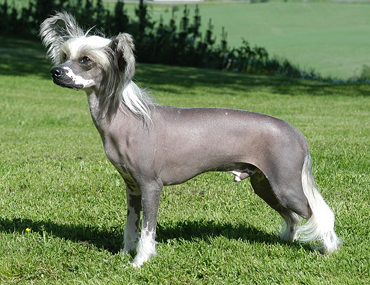 Chinese Cresteds love to play indoors and spend time with the family. They hate the cold weather (especially the hairless), but they will enjoy a quick trip outside and the opportunity to run. Be careful outside, they are exceptional jumpers and sometimes great climbers too.

Chinese Crested Dogs can usually sense how you’re feeling and will try and cheer you up when you’re down.  They’ll also sneak under the covers with you for a nice nap.

It can be trying at times to housetrain the Chinese Crested Dog. It’s important that you establish a routine and a schedule that always stays the same. During inclement weather they won’t necessarily want to go outside and it’s particularly important that you stick to your routine. They can be trained to use a litter box, but it might only confuse them when they're first learning.

As they were once ratters, the Chinese Crested Dog might be prone to chase smaller animals. It would benefit you to put a stop to this behavior early. Give them another way to use their energy. The Crested loves to play games indoors or outside. They’re also a great dog for children.

As with any breed there are several conditions to watch for in a Chinese Crested: