Background
Believe it or not, the Doberman was bred to protect a hated tax collector. Now he’s one of the most loving, loyal, and protective pets a family can have.

In 1890, Karl Friedrich Louis Doberman was a tax collector in Apolda, Germany. Unsurprisingly, he wasn’t very popular. But luck was on his side: he owned the local dog pound, where he was able to combine a long list of breeds to create a guard dog to protect him. After combining big, fearsome breeds like the German Pinscher, Rottweiler, Greyhound, Great Dane, Weimeraner, German Shorthaired Pointer, Old German Shepherd Dog, and more, Doberman created his prototype: a dog that was strong, fast, durable, loyal, intelligent, and, when he needed to be, ferocious.

After years of development, the end result was what we know today as the Doberman Pinscher, named after the breed’s creator. Made an official breed in the United States 1908, the Doberman has a long history of military and police service. He served as the official War Dog of the US Marine Corps during World War II as a sentry, messenger, and the breed was made famous for its role in Pacific battles in Okinawa and Guam. The Doberman was also used for search-and-rescue when the World Trade Center towers collapsed in 2001.

Today, the Doberman is used a lot less for military and police service, and he is the 13th most popular dog breed in America. 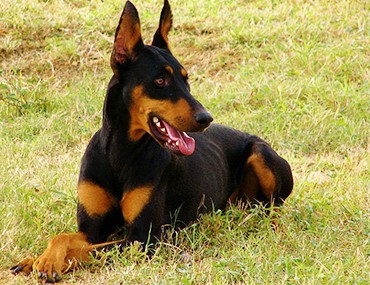 Sizing Up
The Doberman is a medium-to-large sized breed, and here are some common physical traits:

Unfortunately, Dobermans have been given a bad reputation as a “bully breed” for a couple of reasons:

The Doberman is, first and foremost, smart, loyal, and protective. But he is not sinister or ferocious by nature. Feared by those who don’t know him, the properly trained and socialized Doberman is a gentle, watchful companion.

When it comes to health, there are some hereditary problems in Dobermans that you should know about:

Right for you?
As with any new pet, there are some considerations to make before you welcome a Doberman into your family:

When trained well and exercised thoroughly, the Doberman can be a great companion for the right person or family.