History
As the ancestor to all modern long-haired cats, the Siberian is among the most ancient breeds. In fact, he’s been around for at least 1,000 years! Similar to the Norwegian Forest Cat and the Maine Coon, the Siberian is a natural breed from the icy tundra of Siberia and proudly serves as the national cat of Russia.

The Siberian, also known as the Siberian Forest Cat, participated in some of the earliest competitive cat shows, appearing in England in 1871. However, he didn’t make it to the United States until 1990 as the Berlin Wall was crumbling and the Soviet Union was falling.

Cat Facts
Hailing from snow-covered central Russia, the Siberian is an interesting cat: 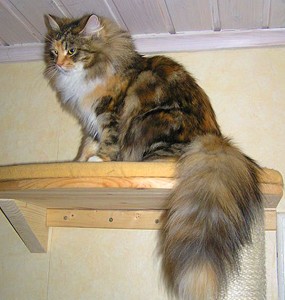 What are they like?
The Siberian is a large cat with the big, wise eyes of a sage and is – you guessed it – highly cuddly! In fact, there’s plenty to cuddle because it’s not uncommon for a healthy, fit male Siberian to weight upwards of 25 pounds. But this cat’s not a fatty: the Siberian is very agile and powerful and is well- known for his superior jumping ability. You shouldn’t be surprised to find an adventurous Siberian perched atop refrigerators, cabinets, and even doors to survey what’s going on down below.

Siberians are mellow cats who tend to get along with everyone. They’re great for families, single people, older people, and get along well with other pets. An intelligent and playful little soul, the Siberian is also content to sit on your lap and purr quietly.

The Siberian is a very hardy breed linked to only one congenital health problem: hypertrophic cardiomyopathy, a form of heart disease.