Veterinary Standards of Care in Developing Nations: A Vet’s Account 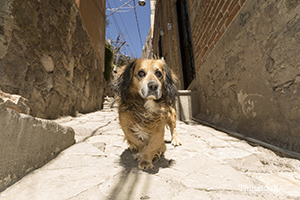 What were conditions like in the past?
When I first began traveling to underdeveloped countries, I was appalled by the conditions provided for dogs. I recall being in Indonesia where we commented on the fact that dogs were a bit like squirrels:

Dogs in these emerging countries were often filthy, malnourished, virtually totally non-socialized and diseased. In Bali, Thailand, China, African villages and much of the Caribbean I found dogs being walked with tails down, ears down and heads down; these dogs seemed virtually afraid to make eye contact. They were in fact virtually wild in their existence and even people who had a working dependency on their dog rarely had an emotional bond.

Even dogs that had caretakers were often merely chained to a cinderblock or a tree. Dog fighting, though illegal, was widespread. Dogs were conditioned by dragging logs, cinder blocks or great lengths of chain. Dogs lay on the road and did a remarkable job of dodging cars.

How are conditions improving?
Seemingly, something has changed in a relatively short amount of time. I remember the first time I became aware of the change: I was on a neighboring island and saw a person walking her dog, of all things, on a leash! There was something different…. The young lady stopped to pet the dog from time to time. The formerly “hangdog” look was gone from the dog’s stature. He was walking with his head up as if to say “Look at me!”

As time has passed, I’ve noticed that this became more commonplace. More dogs have collars and walk on leashes; more dogs seem to have a spring in their step—heads up, tails up, ears erect. While hardly living a Park Avenue life, more dogs are seemingly enjoying themselves. There are still packs of wild dogs, but even those dogs are no longer as fearful or as neglected. They romp and play and sit with people. In short, they act like dogs.

Many more supermarkets now have entire sections and aisles devoted to pet foods—quality pet foods! I’m seeing more litter and litter boxes, indicating that cats are spending their lives indoors, where they are safe and protected.

I have seen a similar phenomenon in several places around the world, and I believe the introduction of the leash was a bridge that reinforced this relationship—a bond that said, “I am with him.” Click here to learn about using the right leash for your dog.

In short, pets in these developing countries are far better off and enjoying a better quality life with more caring owners.