The Overwhelming Street Dogs of Ecuador 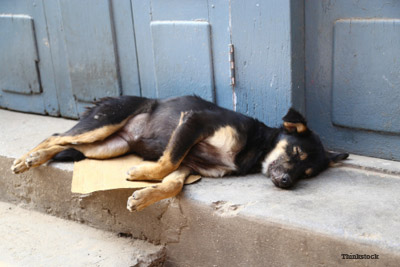 My husband and I recently spent two weeks in Ecuador. Our itinerary included the Galapagos Islands (lucky us!) and countryside in the Andes Mountains. In addition to seeing incredible landscapes and an over-the-top amazing array of animals, we were treated to the warmth and hospitality of the Ecuadorian people.

So many street dogs
Of particular interest to me were the street dogs I observed while on the mainland. I refer to them as “street dogs” because that is where I saw them- in and along the streets. How I never witnessed death or injury caused by the many cars, trucks, motorcycles and buses whizzing by them is beyond me. Much like ravens and crows, these street dogs always managed to get out of the way just in the nick of time. Nonetheless, I did a lot of holding my breath while observing this phenomenon.

There were so, so many dogs. To give you a sense of just how many, picture an average city block. Now, picture walking this block and seeing 25 to 30 dogs lounging on the sidewalks, crossing the street, looking for food, scrounging in garbage bags and socializing and playing with one another. In the large city of Quito, most of the dogs were rather aloof and always seemed to be on the move with clear business to attend to. In the smaller villages, the dogs were generally more social with us and content to simply hang out.

What I noticed about the street dogs
While the numbers of dogs didn’t change much as we moved from town to town, what did change was their general appearance. For example, in one town, it was evident that German Shepherds dominated the gene pool. In another town, we saw predominantly small Poodle crosses, and I was amused by the mostly Shar Pei’ish facial features I observed in another village.

I observed some dogs with skin disease and the occasional dog that was thin or had a significant disability. Otherwise, these dogs appeared remarkably healthy and thrifty. And, unlike what I would see here, in the United States, there was no canine obesity to be found.

What I learned about the street dogs
I talked with several Ecuadorians about these street dogs. (I had lots of questions.) I learned that, for the most part, the dogs are owned. Although they are in the street, someone lays claim to them. In most cases dogs are owned solely for the purpose of property protection. So, while there is a defined human animal bond, it differs significantly from what most of us are used to. In spite of this “business-like” relationship, I watched many dogs wag their tails and wiggle with excitement when interacting with their owners, even when such affection was not obviously reciprocated.

So, while the dogs go home at night, most of their daylight hours are spent out on the streets. I was told that most dogs receive a modicum of food from their owners, but most must rely on food found on the streets to sustain themselves. Most of these dogs have never tasted commercially prepared dog food as it is cost prohibitive for the majority of people.

With rare exception, the dogs I saw were in tact (not neutered). Many of the females looked like they were nursing puppies. Given this, I was surprised that I saw no puppies out on the streets. When I asked about this, I was told a couple of different things. I heard that the puppies are kept close to home. I also heard that they are killed. I suspect that both scenarios are true.

Our time was spent solely in Ecuador, but I’ve since learned that this street dog phenomenon exists throughout Latin America. When I asked some Ecuadorians about neutering as a means of controlling the dog population, some stated that they agree that there are too many dogs and something should be done. Others explained that the indigenous people living in the Andes Mountains desire many dogs for purposes of protection. Additionally, they would not be in favor of their dogs undergoing surgical castration and the loss of their testicles. This prompted me to think that Zeuterin, a chemical sterilization product that leaves the testicles and some testosterone in tact, might be a reasonable compromise.

What’s next?
The street dogs I saw in Ecuador have made a lasting impression on me. and I still have so many questions about them. For example, why, in spite of the fact that there are so many dogs, did I never see even a hint of aggression directed towards humans or other dogs? How old do these dogs live to be? And, isn’t it intriguing that dogs existing on such an inconsistent and completely unbalanced diet appear so thrifty? What happens when these dogs become infirmed or a female gets into trouble delivering her pups? Are they left to suffer and die, or are they somehow humanely put to sleep? Hmmm, something tells me I will need to return to Latin America and learn more about the street dogs living there!