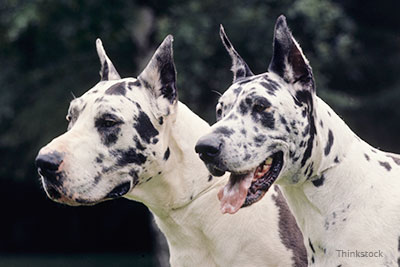 How did ear cropping and tail docking start?
The practice of cropping the ears and tails on certain breeds of dogs goes back in history to a time when dogs were bred and used for much different purposes. Ear cropping in Great Danes began to prevent ripping and tearing when confronting wild boar during a hunt. According to the Doberman Pincher Club of America, “The docked tail and the cropped ears on the Doberman are historically very functional in origin and serve important purposes…The tail served as a handle that an attacker could grab and injure.” To minimize injury to tail or ear, breeders of fighting dogs trimmed off as much as they could. Later, when some of these breeds became used for purposes other than fighting, ear and tail “trimming” (partial removal) was done to suit someone’s sense of esthetics.

What do I think about ear cropping and tail docking?
If, in fact, there was ever a valid reason for cropping the ears on individual breeds, that time has long passed. Boar hunting, bear baiting and hopefully pit fighting are a dark part of history. There is simply no reason for ear cropping, regardless of the preferences of breeders or dog show judges.

Many veterinarians, including myself, have long opposed cosmetic ear cropping in dogs and increasingly oppose tail docking as well. For a number of years, the procedure has not been part of the veterinary education and has been perpetuated by veterinarians learning on their own to perform a surgery with no indications.

There is no scientific or medical reason for either procedure. They are performed strictly at the cosmetic insistence of the pet guardian. It must stop.

If your veterinarian refuses to perform these procedures, it is because he has the best, most humane interests of your dog at heart.