New Study Shows Rolling Over May Not Be Submissive Behavior 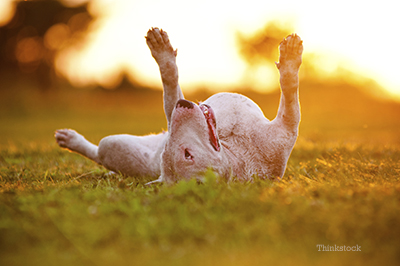 “Appear weak when you are strong, and strong when you are weak.” Those words were written over 2,000 years ago by Sun Tzu in “The Art of War.” Like most veterinarians, I was taught that whenever dogs rolled over, they were being submissive. At least four behavioral researchers disagree. Based on a new study published in the journal “Behavioral Processes,” our dogs may have been following Sun Tzu’s advice when it comes to rolling over. What may be caninedom’s greatest secret is out: Rolling over is the new ninja.

The old assumptions about rolling over
Most of you have heard that a dog rolling over on its back is indicating, “I give up.” Many have witnessed two dogs meeting for the first time and one of the two instantly drops to the ground, belly up.

I remember when I first met my wife; I hit the ground groveling and have remained there for almost 30 years. These are commonly thought of as submissive postures or signals. They’re also key to a lasting marriage.

Leave it to modern researchers to question this age-old wisdom and threaten to turn the canine behavioral world upside down, not to mention threaten countless relationships, including mine. After analyzing countless hours of videos, the researchers concluded that rolling over was actually a very slick combat tactic. I’m serious. And I agree. I think.

The study of rolling over
According to Kerri Norman, and the other authors of the study, domestic doggie dyads were secretly filmed while engaged in play. I’ll save you a trip to the dictionary and remind you that a dyad is a group of two. In my defense, I adore alliteration.

Researchers wanted to scientifically establish if the rollover move was a submissive signal or a combat maneuver.  They observed a few interesting findings:

So what causes a rollover? Rollovers occurred more frequently the longer two dogs played together in this study. This led the scientists to speculate that rollovers were a part of a more complex play process or simply a sneaky skirmish stratagem (alliteration again…sorry). On super slow motion review, most rollovers were a way to avoid bites to the neck or a wily attack launch.

That’s also my view, based on observing my dog, Harry.

My conclusions about dogs rolling over
Growing up and wrestling with dogs, I suspected the rollover was a way to lure me into relaxing for a moment and putting my guard down. I’ve been pounced on innumerable times by a prostrate pooch. It wasn’t until October 2013 that I captured the underhand rollover ninja attack move on video. My terrier, Harry, was playing with his much-larger buddy, Hans the Boxer. At around the 30-second mark you’ll spot exactly what I’m guessing those researchers picked up on. Harry acts “broken” and collapses on his side. Poor Hans looks down on his little buddy, fearing the worst. As soon as Hans relaxes, Harry springs up and delivers a nip! I was so proud.

The next time you see a dog rollover, remain vigilant. And guys, if you want to stay with your lovely spouses as long as I have, keep rolling over. I hope I’m never stupid enough to try a ninja move on my wife. That could very well be the last you ever hear of me.