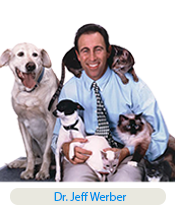 For years I have been working with a number of rescue groups in Southern California—not an easy task.  It’s very hard to say “NO,” to these groups who have only the noblest of intentions and the biggest of hearts; I, and my employees, are also real “softies.” I am, however, often forced to be practical when dealing with these groups, their rescued pets, and especially their enormous hearts. Though difficult, I often find myself trying to teach or advise them of the virtues of, as we like to call it, the “hard health” mentality. Simplified, this means that, though difficult, we need to consider what might benefit the masses.

Saving one vs. saving more
Given the hundreds, even thousands, of very healthy, adoptable dogs overcrowding our shelters: it may not be in the rescue group’s best interest to spend hundreds, or even thousands of dollars on one very needy animal whose chances of survival are very slim. I often find myself asking the rescue group personnel: “Do you have any idea how many healthy pets you could pull out of a shelter TODAY with the money you are about to spend on an animal with a poor chance of survival who will be very difficult to place into a home?” I know it’s tough, but we often need to face the facts and look at the “big picture.” 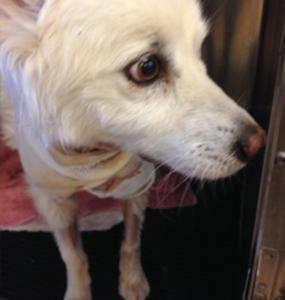 One dog’s will to survive
Well, last week I broke my own rule—initially not by choice, but by directive, and in the process I learned an important lesson about the “will to survive” from my new friend, Henry.

Henry, a roughly 4-year-old male American Eskimo dog, was found by a good Samaritan meandering in the streets of downtown Los Angeles. When the woman approached Henry to help him, she couldn’t believe her eyes. Henry’s neck was completely ripped open—exposing layers of black, necrotic muscle and tissue; dried, necrotic, badly bruised skin; and multiple puncture wounds adjacent to and surrounding the gaping flesh. She coaxed Henry to her car, and drove him to the nearest animal shelter.

[Editors Note: Photos of Henry’s injuries and recovery are available. Be aware that these images are extremely graphic: Henry’s presentation and recovery photos]

One of the shelter volunteers called one of the local rescue groups to see if there would be any interest in trying to save Henry. Henry’s story, and, of course pictures, hit the circuit, and Henry ended up on my doorstep. What I saw was disgusting, and I was amazed Henry was still breathing. In addition to the obvious damage—probably caused by aggressive dog bites, or possibly a coyote attack—Henry had severe air emphysema around the injured area and we could even hear the air leaking out of his trachea and into surrounding tissue. We estimated that these wounds were at least a week old, probably older. He was truly suffering, and I didn’t think it was fair to allow this.

I spoke to the head of the rescue group, and advised her that it would be in poor Henry’s best interest to put him out of his misery. Because, however, Henry was released to the rescue under the “Good Samaritan” rule, and since quite a bit of money was already raised on his behalf, she asked me to “do what I can.”

Treatment and recovery
Well, not wanting to do anything half-way, we began aggressive treatment--IV fluids, IV antibiotics, pain medication, etc. and once Henry was a bit more stable, we anesthetized him to clean, debride (remove the dead and dying tissue), place drains, and suture what we could. 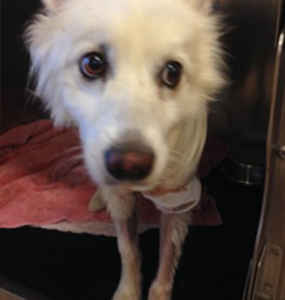 Amazingly, his jugular vein and carotid artery were not damaged; we found and closed the substantial tear in his trachea. We cut away all the necrotic, infected tissue, and, on this first procedure (we knew there would be more), we were able to close about half of the huge defect. In the ensuing few days, Henry’s condition improved—he began to eat well and gained back much of his strength. He even began to like and trust us.

Since he showed so much promise for recovery, we performed two more minor procedures to debride more dying and necrotic tissue and close even more of the large skin defect.

Now, about 2 weeks later, he’s almost ready to go to a new home—and I have to say, the prospective adopters are lining up around the block. Thanks to the Internet and a group of amazing, loyal, caring rescue volunteers, Henry’s story has been seen by countless pet lovers who would love to give this remarkable dog a forever home.

With all the sad, often hopeless cases we often have to deal with working in the rescue world, it’s wonderful to have a dog like Henry cross our paths every once in a while to restore our faith in ourselves and to continue to give purpose to all of the enormous hearts out there.

Jeff has more than 30 years of experience in the veterinary industry and is a licensed veterinarian as well as a founding member of IDEXX’s Pet Health Network team.
Read more >