Armadillos Spread Leprosy in Florida: Are Dogs and Cats at Risk? 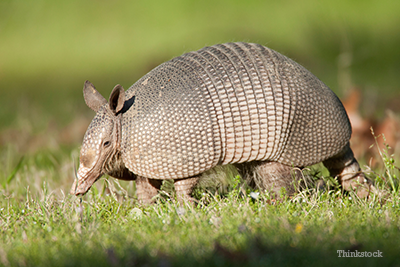 Leprosy… the very word produces mental images of suffering and disfigurement. Throughout its history, leprosy has been feared and misunderstood. Stanford University says that, “For a long time leprosy was thought to be a hereditary disease, a curse, or a punishment from God.” Stanford also reports that it’s an ancient disease, and discussed in an Egyptian Papyrus document written around 1550 B.C. Around 600 B.C. Indian writings describe a disease that resembles leprosy too. “In Europe, leprosy first appeared in the records of ancient Greece after the army of Alexander the Great came back from India and then in Rome in 62 B.C.”

In spite of the fact that most people, and many health care providers, have never seen the disease, Leprosy has been extremely prevalent in various areas throughout history. Amazingly, it is now experiencing a renewed incidence in our own country from a most unlikely source.

What is leprosy?
Jareen Imam of CNN.com reports, “Leprosy is a rare disease, and there are, on average, 50 to 100 cases in the United States every year, according to Dr. Sunil Joshi, president-elect of the Duval County Medical Society in Florida.”

What is the cause of leprosy?
Leprosy is a chronic disease caused by a bacillus, Mycobacterium leprae.

How is the leprosy spread and what can it do?
Leprosy is not highly infectious. It is transmitted via droplets, from the nose and mouth, during close and frequent contacts with untreated cases. The causative organism multiplies very slowly and the incubation period of the disease is about five years. Symptoms can take as long as 20 years to appear.

Untreated, leprosy can cause progressive and permanent damage to the skin, nerves, limbs and eyes. Early diagnosis and treatment with multidrug therapy (MDT) remain the key elements in eliminating the disease as a public health concern, according to the World Health Organization.

Also according to the World Health Organization, official figures show that more than 215,000 new cases of leprosy were reported in 2013, globally.

Are dogs and cats ever infected by leprosy?
While uncommon, leprosy has been reported in both dogs and cats (1,2). Affected animals develop nodules in and under the skin associated with acid-fast bacteria in the cells (3).

Recent leprosy increase in the U.S.
Recently there seems to have been a significant increase in the number of cases in Florida, according to CNN. The U.S. Department of Health and Human Services speculates that it's possibly because of increased contact between people and leprosy infected armadillos. Experts said they believe the spike is because of people coming into contact with armadillos. Armadillos are one of the only known animals to carry leprosy.

How can you prevent or avoid Leprosy?
CNN reports that, “Experts are urging Floridians to use caution and not touch the small, cat-sized creatures. Armadillos are common in Florida and found across most of the state, according to the Florida Fish and Wildlife Conservation Commission.” Be sure to contact Animal Control officials or a professional trapper to avoid the risk of infection.