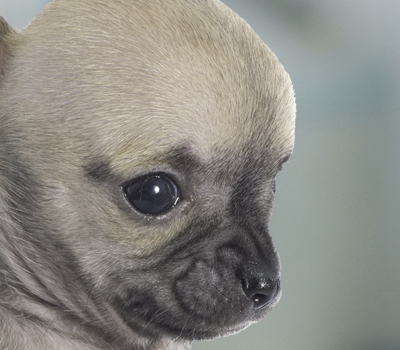 TurboRoo is the two-month-old Chihuahua you may have heard about being born with only two legs. According to FOX News, after realizing he would need specific care, his breeder dropped him off at a veterinary clinic in Indianapolis, where Ashley Looper, a Veterinary Technician, quickly formed a special bond with the tiny trooper and began fostering him.

Looper explains TurboRoo would move around by hopping, “like a little frog.” She then decided that a cart would allow him to be much more mobile so she started a fundraiser online called “Wheels for TurboRoo!” Soon, she was contacted by Mark Deadrick, a mechanical engineer and president of 3dyn, who offered to make a custom 3D-printed cart for TurboRoo— talk about having the coolest ride in town!

Deadrick followed through with his offer rather quickly, “He had messaged me on my personal Facebook and asked me if it would be ok for him to make a cart for Turbo,” Looper told FOX News. “Within two days he basically, without measurements, without anything, he sent me a message and said, ‘I have a cart for you, it will be in the mail, you should get it by Thursday,’ which was two days after we spoke.”

Since then TurboRoo has gone through three different versions of 3D-printed carts sent by Deadrick. Looper and Deadrick will be working together to update his cart as he grows.

Looper expresses, “I think it’s amazing that people are just so supportive of him.” She has now added him to her family permanently.

Have you ever cared for a pet with special needs?