Have you seen Snowball? The cockatoo that made his debut dancing along to Everybody (Backstreet’s Back) by the Backstreet Boys. Snowball’s video caught the eye of over 5.6 million people.

According to Robert Krulwich of NPR, professor Aniruddh Patel turned snowball’s dance into a science experiment to see if he could get Snowball to dance to 11 more beats. The results surprised Patel; Snowball was actually able to dance along with beats other than the one that made him famous. Patel was baffled because it was widely thought that parrots weren’t able to hold a beat. 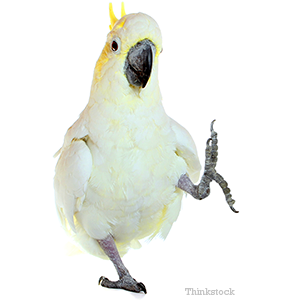 While there are many videos out there of “dancing” animals (dogs, cats, horses, etc.). They’re usually not exactly “dancing.” Krulwich reports that while the animals may stomp, bob, wiggle, nod, and jerk, they aren’t really dancing as science defines it.

Patel’s experiment took place in northern Indiana where Snowball resided at an animal rescue center—Bird Lovers Only. Irena Schulz, director of Bird Lovers Only, was given the Backstreet boys CD by Snowball’s former owner. She played the track and, sure enough, Snowball responded.

Petal took things a step further. He and Irena played the track at 11 different speeds with different beats and tempos. They studied Snowball carefully to see if he stayed on beat throughout. It turned out that Snowball was “off beat” about 75% of the time, but the conclusion was very interesting.

The findings, which appeared in Current Biology, declared Snowball to be the first ever nonhuman dancer. Researcher Noah Strycker said, “The probability of Snowball displaying even as much synchronization as he did merely by chance was minuscule. That satisfied Patal.”

Do you think your pet has the moves like Jagger? Let’s see them!