The Old English Sheepdog is a relative newcomer. He originated in the early 1800s and is believed to be a descendent of the Scotch Bearded Collie and the Russian Owtcharka. He was used to protect flocks from predators and later to herd livestock to the market.

The Old English Sheepdog wasn’t officially recognized until 1885 at which time a breed standard was written by Freeman Lloyd. At that time the Old English had already started his transformation from herding dog into family companion and show dog.

By the time the Old English found his way into America he was already a favorite in the show arena. Many American members of high society also embraced the breed. He was recognized by the American Kennel Club in 1888, and enjoyed a popularity surge in the late 1900s after being featured in several films. 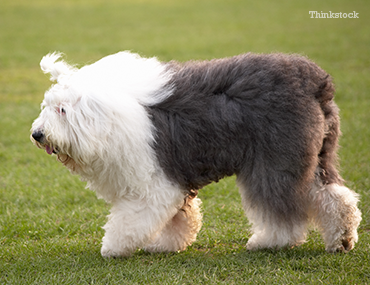 The OES is a family guardian and protector. As long as he knows everyone’s safe he’ll be a funny, clown-like, source of entertainment. He’s sweet and generally calm. He can sometimes be sluggish, but is social and very smart. The OES has instincts to herd and might try to do so with the kids. He can become nervous or anxious when left alone and might try to escape the house or yard to go see where everyone went.

The OES is an indoor dog for the most part but don’t let him become a couch potato. He should be exercised at least once per day with a nice long walk, preferably with the rest of the family. He can be independent when it comes time to train so patience and persistence will be important.

The EOS requires regular grooming and you might need to spend a half hour untangling his hair.

As with any breed there are certain conditions to watch for in the Old English Sheepdog: