According to DNA testing, the Chow Chow is grouped with thirteen other dogs as one of the most ancient breeds in existence. Ancient Chinese artwork supports this claim, and depicts dogs very similar to the Chow Chow around 150 BC. At that time Chow Chows would have been used for hunting, herding, guarding households and for human consumption.

Generally found in Southern China, the Chow Chow was a typical piece of cargo onboard Chinese shipping vessels. The name “Chow Chow” refers to the Chinese words for miscellaneous items. During the 1800s Chow Chows were imported into England where they were noticed by Queen Victoria and subsequently popularized.

Soon afterwards they were sent to America and exhibited in 1890. The American Kennel Club recognized Chow Chows in 1903. Their popularity among American families soared throughout the 1980s. 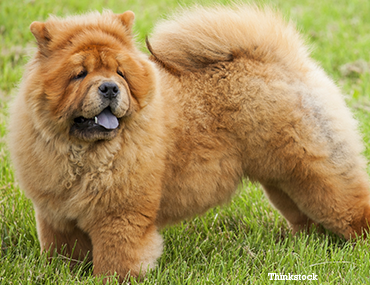 Despite rumors that Chow Chows were the inspiration for the first teddy bear, they are not interested in cuddling or being fawned over. They are very serious and dedicated dogs who would rather guard the house for intruders than endure a hug. The Chow Chow is territorial and can be aggressive towards other pets, particularly other Chow Chows. Homeowners insurance might increase for families owning a Chow Chow. The good news is that a well socialized and well trained Chow Chow shouldn’t show any aggression.

They usually show the most devotion to a single family member but will be fiercely loyal towards, and protective of, the rest of the family as well. Older children would be better playmates than younger children for the Chow Chow, who doesn’t like being manhandled.

The Chow Chow is well suited for apartment living but he will need a walk every day to keep him calm. He’s likely to remind you it’s time for a walk if you forget.

The Chow Chow can’t tolerate too much humidity or an overabundance of outdoor activity. Training and play sessions should both be kept short to avoid any problems. He also needs to be brushed every other day during shedding season.

You should keep an eye out for any of the following conditions when adopting a Chow Chow: