English Setters were originally called Setting Spaniels and are descended from Spanish Pointers. Similar dogs were referenced as far back as the 1500s and it’s a certainty that English Setters preceded the invention of the gun. Setters were used to “set” game. Meaning they crouched down next to birds and waited for the hunter to throw a net over both of them. Crouching also came in useful after the gun: keeping setters safe from friendly fire.

Today’s English Setters are largely the result of Edward Laverack’s breeding efforts. He developed a unique setter with improved hunting ability. R. Prucell Llewellin was also highly influential on the breed. He used Laverack’s model to breed a more regal type of Setter who excelled in dog show competitions. Both dogs were popular in England long before coming to America.

The American Kennel Club recognized the English Setter in 1884. 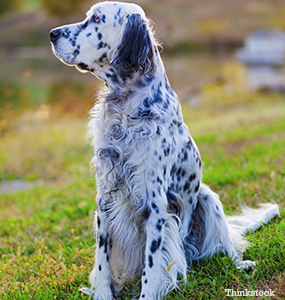 English Setters are hunters and you can expect some portion of their day to involve searching for birds. Farm life would suit the Setter just fine as would frequent hunting trips. If you exercise your setter in the backyard he should be on a leash or safe behind a fence. Setters can live in more urban environments as well but will need to have a long walk every day and an active owner.

Setters are excellent child companions because they have friendly and upbeat attitudes along with plenty of patience. Setters will tolerate rough play but you’ll need to step in if the kids start pulling hair. They enjoy time both indoors and out.

Setters are much more embracing of the family than they will be of strangers. Early socialization should help your setter adapt to new faces later in life.

Setters are intelligent but not necessarily easy to train. They are easily distracted by birds or other small creatures. Stay positive at all times and provide plenty of reinforcement when the Setter does something right.

An English Setter’s ears should be cleaned on a regular basis to prevent dirt from collecting and causing an infection. Other conditions to watch out for include the following: