Spaniels are presumed to have originated in Spain, but their exact origins have never been established. What’s known for sure is that for centuries Spaniels had been used as a hunting dog. In England two varieties of the Spaniel developed. The first was a large breed used to scare game from the brush. The second, a smaller version of the spaniel, was used for hunting woodcocks. In 1902 the groups were separated as the English Cocker Spaniel and the English Springer Spaniel. 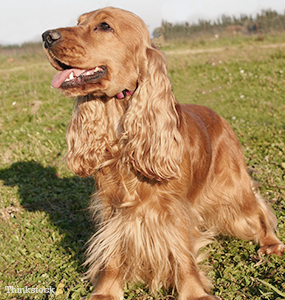 Finding the right breeder is a very important step in raising a well adjusted English Cocker Spaniel. It’s important to do your research and find a breeder you can trust. Once you find the right dog, begin training right away. A well-bred Cocker will be sweet and intelligent so training won’t be difficult. Positive reinforcement is important as the Cocker is sensitive and won’t respond well to harsh words. As with most breeds you should socialize early and often.

The English Cocker was born and bred for hunting. That doesn’t mean you’ll need to take up hunting, but it does mean that exercise will be an important part of daily life. He could run all day, but doesn’t necessarily need to, a half hour of exercise twice a day should be sufficient for an average English Cocker. He also loves the water and would enjoy frequent trips to the lake.

Due to the size of the breed he is great around kids. He’s big enough to play with but not so big that he might knock children over. Not to mention the affection and love he would offer a toddler.  He’s also good with cats, although maybe not so good with birds: he is programmed to hunt them after all.

Just because the English Cocker is a hunting dog doesn’t mean you can leave him outside. He’s an indoor dog and would much prefer to be with the family. He’s likely going to have some amount of separation anxiety when you leave.

Progressive retinal atrophy is an eye condition and has been documented in both American and English Cockers.

English Cockers have long, hanging ears and as a result are at risk for certain conditions: