Background
Some suggest that the Dachshund’s earliest roots go back to ancient Egypt because of engravings of small, short-legged hunting dogs. But the Dachshund we know and love today is a product of German breeding. Originally used to hunt badgers because of their ability to track and their fearlessness, Dachshunds were for years been popular in royal courts around Europe, such as that of Queen Victoria.

The name literally means “badger dog” in German, though Dachshunds were also used to hunt rabbits and foxes, to locate wounded deer, and hunt in packs for wild boar and wolverines. Needless to say, although the Dachshund’s bark is bigger than its bite, the breed is well-known for being fearless and standing its ground!
The breed became popular in the U.S. in the early 1900s and is now in the top 10 most popular breeds in the US. 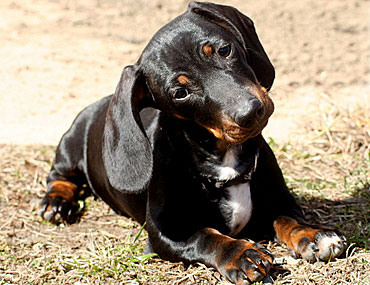 Sizing up (or down)
They’re all short with cute stubby legs, but Dachshunds actually come in three sizes: standard, miniature, and kaninchen (“rabbit” in German). A full grown standard Dachshund averages 15-28 lbs. while the miniature typically weighs less than 11 lbs. The kaninchen usually weighs around 8-10 lbs.

Other physical characteristics include:

What are they like?
Dachshunds are brave, vibrant little clowns and are a lot of fun to have around! Because of their small size and ability to adapt to new environments, they travel fairly well. Their loyalty borders on being over-protective, but it’s only because they are friendly little dogs that love to follow you wherever you go.

They have a strong digging instinct, so you’ll often find Dachshunds burrowing into piles of laundry or even couches and chairs (it’s really cute!). They’re spunky and energetic, but they don’t need a huge space to blow off steam. However, when they’re outside, they’re great hunters and often show the prey drive that once made them popular as hunting dogs. Because of this, they may not be the best candidates for being trusted off a leash; they’ll often run after the first scent or sight they find and not come back when called.

There are a few health concerns that you should know about if you’re interested in welcoming a Dachshund into your family:

Right for you?
Dachshunds can be great dogs for the right person or family, but there are always things to consider when thinking about welcoming a new dog into your home.