Can You Tell What Your Dog Is Feeling?

Dr. Ernie Ward looks into the age-old question: can we tell what our pets are feeling based on their facial expressions? For more from Dr. Ward, find him on Facebook or at www.drernieward.com.

Most pet parents will tell you they can tell what their pet is feeling simply by looking at them. For years, mainstream scientists have dismissed reading a dog’s emotional facial expressions as wishful thinking. New research suggests we may be able to correctly guess our pet’s feelings after all.

Back in 1964, Dr. Niels Bolwig, a pioneer in behavioral biology, described the facial expressions of dogs and their corresponding emotions. In 1970 Dr. Michael W. Fox, later of the Humane Society of the US (HSUS), dismissed Bolwig’s research and claimed pet dogs were unreliable test subjects for facial expressions. Fox postulated that due to domestication, dogs had learned facial expressions that worked best to achieve their goal, especially when their goal was food. Since then, little research as been conducted on dog’s facial expressions. Until now. 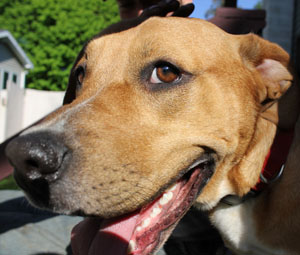 Teams from the psychology department of the Pennsylvania Department of Corrections in Marienville (you read that right - a prison), and tiny Walden University in Minneapolis (with help from the University of Florida) decided to see if humans could accurately read a dog’s emotional facial expressions. The scientists took photographs of a Belgian shepherd police dog, Mal, as he experienced different emotions. For example, they praised Mal to elicit a “happy” reaction. The handler reprimanded Mal to create a “sad” picture. A jack-in-the-box was used to “surprise” Mal, and a repulsive medicine that Mal strongly disliked was used for “disgust.” Mal disliked having his nails trimmed; that’s how they captured “fear.” To cause “anger” was easy; they suited up a police officer as a bad guy. Each photograph was a close-up of Mal’s face and head.

The pictures were shown to 50 volunteers divided into groups based on their experience with dogs. Their findings were surprising.

“Happiness” was the most accurately judged emotion in the study. 88% of the study participants correctly identified “happy” while only 37% identified “sad.” The next most predictable emotion was “anger” at 70% judging correctly. 45% recognized when Mal was “frightened” yet only 20% spotted “surprise.” A scant 13% knew when Mal was “disgusted” by the bitter medicine. Then it gets interesting.

This study found that people with minimal dog experience are better at identifying anger and disgust than more experienced dog lovers. The lead researcher Dr. Tina Bloom postulates that experienced dog owners convince themselves that their own dogs aren’t truly aggressive and the associated facial expressions are viewed as “play behaviors.” She speculates that reading dog’s faces may come naturally to humans instead of being a learned skill. Bloom seeks further research into whether our apparent natural empathy with dogs is shared with other mammals or if this is the result of our co-evolution with dogs for the past 100,000 years. Bloom is an admitted dog lover (she shares her home with two Dobermans and two Rhodesian ridgebacks) and described herself as “very confident” that she can read the faces of her dogs.

Dr. Bloom summarized, “If I adopted a cat, or a snake or a turtle, I don’t think it would be as emotionally attached to me and watching my face as much as a dog would. There is something different and special about a dog — I’m not sure what it is, but it’s there.”

I don’t agree with her view of cats on this issue, but I understand what she means. We can all agree there’s something special about the relationship between humans and mammals (and maybe even snakes and reptiles). Go see if your dog is happy. You’re probably going to be right if it is.