Do Dogs Really Feel Guilt When They Look Guilty? 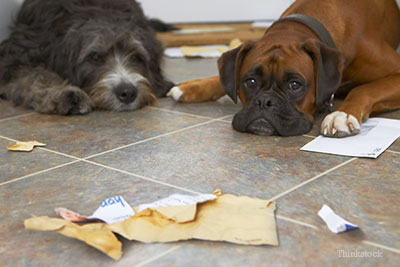 We all want to believe that our dogs are capable of complex emotions. We want them to love us, not just to need us because we feed them. We don’t want them to just be happy that we have come home. We want to know that they missed us when we were gone. Personally, I think we just want to know that they feel about us, the same way that we feel about them—with that same level of care, adoration and appreciation for the place they have in our hearts. So I don’t find it at all surprising that we also want to think they feel remorseful when they do something bad. We want to think that they value our opinion and our approval–that they anticipate our disappointment and feel guilty for having let us down. The question is, do they?

What does it mean when your dog looks guilty?
Let’s say you find evidence of a transgression (a chewed shoe, an unsanctioned indoor bathroom break, or an empty plate where there once were freshly baked cookies) and you turn to your faithful sidekick and query, “What did you do?” How else does your dog respond but with that classic, hangdog, sad, boo-boo face. The face that tells you immediately, not only is she responsible for the transgression, but also (and maybe most importantly) she is sorry that she did it. Okay, to be fair, you might admit that the way you say “What did you do?” might, possibly, cue that expression. BUT what about when you come home and she makes ‘the face’ before you discover the offense? Certainly THAT proves that she knows she did something wrong, right? Not necessarily.

What does the science say?
I believe that there is just no way to know for sure when a dog feels guilty. Until we can ask that question of a talking dog, we simply cannot be certain. That doesn’t mean, however, that researchers aren’t trying to find evidence.

In a study published earlier this year, Ljerka Ostojic of Cambridge University developed a study to see if owners could tell by looking at their dog’s face whether the dog had misbehaved in their absence. According to ScienceDirect.com, the dog was instructed not to eat a “desirable treat.” The owner left the room, and a researcher either took the treat away or got the dog eat it. When the owners returned they had to read the dog’s expression to decide what had transpired. The study concluded that:

Also according to ScienceDirect, some years ago, a similar study performed by Alexandra Horowitz at Barnard College came to similar conclusions. In addition, Horowitz found more ‘guilty look’ behavior when the owner scolded the dog (no surprise there), and that ‘the effect of scolding was more pronounced when the dogs were obedient, not disobedient.” Horowitz concluded that the guilty look was a response to owner cues rather than an appreciation of the dogs’ own misdeeds.

Evolution and the ‘guilty look’
It appears that evolution may play a role in the ‘guilty look.’ ScientificAmerican.com says, “Darwin observed that the types of behaviors associated with guilt - keeping one's head down, and averting one's gaze - are also seen in other social non-human primate species… this should not be too surprising; guilt serves to reinforce social relationships and to minimize the effects of transgressions against social partners.” Research indicates that this might also be the case for wolves as well as domesticated dogs.

In other words, this kind of behavior might not mean the same thing to your dog that it means to you. It is possibly, simply, a learned means to an end. I’m reminded of when my grandson was very young and always quick to say “I’m sorry,” especially when prompted by his parents. But when I would ask, “What are you sorry about?” he was often at a loss. He knew that saying ‘sorry’ was the appropriate means to an end, but he didn’t actually seem to understand why.

This brings us to one of the most interesting aspects of our perception about guilt in our dogs. According to pshychologytoday.com, “In the study by the Hungarian research team [Julie Hechta et al.], it was found that among the owners who claim that their dog shows guilty behavior, more than half (59 percent) claim that their dogs "guilty" behavior leads them to scold their dogs less.” It’s entirely possible that your dog has learned to appease you by putting on that guilty look, even though she doesn’t feel guilty at all.  If that is the case, then you can’t actually brag your dog is experiencing the complex emotion of guilt, but you can tell all of your friends how very, very smart she is.