Want to Stress Your Cat? There’s an App for That

Posts by:
Dr. Ernie Ward, DVM
Want to Stress Your Cat? I hope not, but yes, there’s an app for that
A Vet's Life 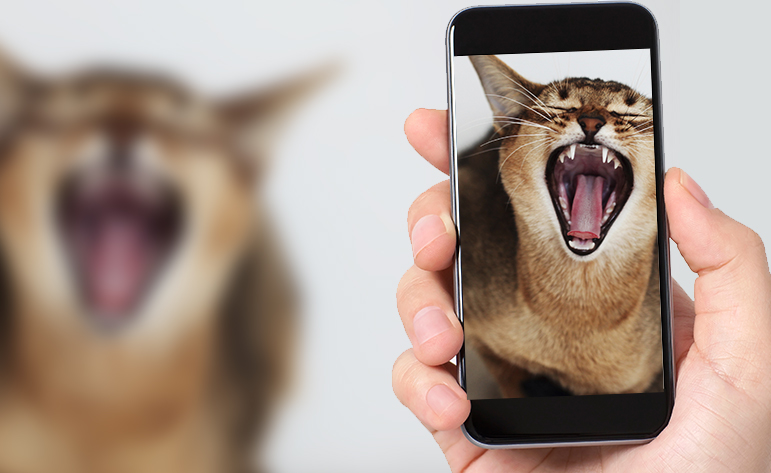 Smartphones have transformed us. We talk, text and toil from the palm of our hand. In general, technology has improved our lives and brings smiles to our faces. Except when it doesn’t. There’s a surge in “animal-to-human” and “pet talk” smartphone apps that may be stressing your pet out. And that’s got me upset.

I was alerted recently to a trending You Tube video titled, and please don’t click on the link, “What happens when you smack talk a cat.” [Editor’s Note: Please do not ever attempt this activity. As Dr. Ward warns, it can result in severe injury to yourself or your family members.] Normally, I’d ignore such footage because they typically involve someone doing something stupid and dangerous to an animal. This video didn’t disappoint. That’s why I don’t want you viewing it for fear that extra views will encourage someone to copy what happens. So what’s in this forbidden film?

In the video, a woman with a knee wrap is seated on the floor next to, inexplicably, a large pile of cast-iron dumbbells. Barely visible in the background is a cat perched on the lower shelf of a coffee table. The woman looks into the camera as she is holding her smartphone and reveals, “This is a human to cat translator. Here we go.”

She looks over to her cat and presumably presses the “Start” button. We don’t know what word or words she entered into the app to “translate” into “cat.” I’m concerned it may have been “smack talk” based on the video title. We don’t have to wait long to find out.

An extremely loud cat yowling sound begins emitting from her phone. Her cat immediately unfolds itself from underneath the table and abruptly approaches the phone. The cat lowers itself, and pauses just in front of the phone. The mewing from the phone continues. Most people viewing the video would focus on what happens next with the cat. I found myself captivated by the woman’s subtle body movements. As the cat approaches, the woman begins staring intently at the cat. When the cat pauses before her, she flinches ever so slightly. That's when I knew this wasn’t the first time she’d done this to her cat. In fact, if I had to guess, I’d wager this lady knew exactly what would happen and asked someone to film it for giggles.

The cat begins to stretch itself upward with paw extended as the phone continues caterwauling. The lady subtly flinches again, as if anticipating something. And then the presumed payoff: The cat lurches up and swats at the lady’s face. The lady swiftly backhands the cat as it retreats hissing, lowering its ears, and slinking away. I suspect the cat is declawed by the absence of blood pouring from the lady’s arm. The woman throws her head back and laughs loudly; the cameraperson laughs and the video is over. “Look at that stupid cat, attacking the phone!” is the message the video seems to say.

Why is this video so dangerous?
Look at the stupidity of using a phone to scare a cat, I say. First and foremost, I don’t think it’s ever okay to willfully provoke another being for our pleasure. Would almost a million people view a video of a toddler in a high chair screaming after being frightened by a mom jumping out dressed as a bear? What if there was an app that translated “baby talk” consisting of painful and fearful infant screams? What if you played the “translations” for your baby, videotaped them freaking out, and posted it on You Tube? Funny? I don’t think so. I think you’d be calling Social Services.

Secondly, apps that promise to “translate” to or from animals are a joke. In most instances, the noises produced will alarm and potentially frighten your pet. That’s what we see in this video. I have no tolerance for anything that scares, stresses or in anyway harms the happiness and well-being of our pets. These apps are at minimum worthless and at most harmful. Delete.

Finally, before you say, “No harm, no foul.” or “Lighten up. It’s just a stupid video.” I want to remind you that a lot of people have viewed this episode. Some percentage will search for these apps and the cycle will be repeated in their home on their pet, hundreds of thousands of times. I must try to stop that.

What do vocalizations mean to pets?
Vocalizations – barking, hissing, meowing, growling and all order of sounds – have real meanings to our animals. Most involve “Danger!” or “Help!” I have no idea what the app was saying to the cat in the video other than it triggered an extreme emotional response. Add a dash of backhand swatting and you’ve got a totally stressed cat. I call foul.

This video could’ve ended with the lady losing an eye; I’ve seen that injury in real life. It could’ve ended with the cat having a head injury or broken leg if the guardian accidentally flung it into the cast-iron dumbbells; I’ve also seen plenty of those injuries. We do know it ended with a cat forever affected in the way it approaches and interacts with a person. Cats are incredibly complex critters; this app and video proves that. This video also demonstrates we’ve got a long way to go to educate people about how to understand and compassionately care for pets. We can start by ignoring these videos and apps.