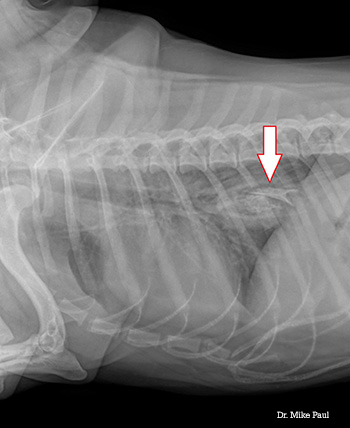 Sometimes, our pets get in serious trouble after a seemingly innocent event. Bee was given a piece of chicken by his unsuspecting guardian. Soon, the cute, 3-year old Shih Tzu stopped eating. Then he started drooling excessively and vomiting. Bee’s family vet took X-rays that showed a large bone stuck in Bee's esophagus! Apparently, Bee’s guardian had been unaware that the chicken contained any bones at all.

The esophagus is the tube between the throat and the stomach, passing through the entire length of the chest. It has the ability to propel food and water down to the stomach for digestion. Bee's vomiting, drooling and not eating were typical signs of something stuck in the esophagus (an esophageal foreign body). Other signs can include:

This problem can happen to any dog (or cat) breed, but it is more common in small dogs, especially Terriers.

Removing Bee’s bone
Because the bone looked very sharp, removing it with an endoscope (a small device that can fit down the esophagus) was not a good option, as there was a risk of causing damage to the esophagus as the bone pulled out. Therefore, open chest surgery (thoracotomy) was the best option. This is a very delicate surgery, which is typically performed by a board-certified surgeon.

Bee went under anesthesia and into surgery. There were no bones to “crack.” We went between two ribs, exactly where the foreign body was seen on the X-rays. An incision was made into the side of esophagus, and a large chicken bone, along with smaller splinters, was removed. The bone turned out to be the shoulder blade of a chicken!

At the end of the surgery, a temporary plastic tube was placed through the skin into the chest cavity to help evacuate the air that was let in when the chest was opened. The surgery was a success and Bee recovered smoothly from anesthesia.

Bee after surgery
Our patient was kept on antibiotics and pain medications before, during and after the procedure, along with an antacid to minimize heartburn. No food was given for 24 hours, after which a liquid diet (canned food mixed with water) was prescribed for 3 weeks in order to minimize trauma to the healing esophagus. Post-surgical instructions also included strict confinement and leash walks only, along with a plastic cone for 3 weeks while Bee was healing.

The morning after surgery, Bee's chest tube was removed without any problems. The next evening, he happily started to eat his liquid food on his own. He went home about 48 hours after surgery.

Three weeks later, the skin staples were removed and Bee’s diet was slowly changed from gruel to his regular food. His activity was slowly increased, and he made a full recovery. Thanks to the quick thinking of his guardian and the veterinary team, Bee's life was saved.

Bee was very lucky. The sharp bone could have done a lot more damage. It could have cut into the esophagus, which could have led to a serious infection around the lungs and heart. This is the reason why it is so important to bring a pet with signs like vomiting and not eating to your family vet or the emergency clinic as soon as possible. You also want to be very careful about what you feed your dog and always check with your veterinarian before giving him anything new.

Questions to ask your vet if your pet is vomiting: