Memories of a Vet’s Trip to China: An Evolving World for Pets

A colleague and I were recently invited to lecture in Shanghai, China. It was a great honor, a fantastic experience, as well as the fulfillment of a life-long dream.

The attendees had an incredible thirst and enthusiasm for new knowledge.

Pet ownership is a fairly new phenomenon in China. “Until a few decades ago, dogs were only used in the army, at the circus, as working dogs or as food,” explained a colleague. 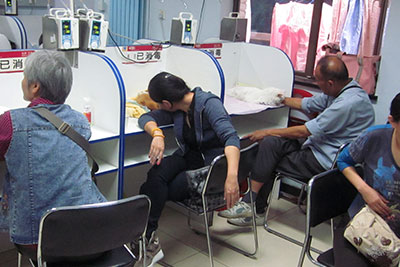 More dogs as pets, and less as food
Speaking of dogs used as food—this is a sore topic— Don’t think that you find dog meat stores at every corner! Consumption of dog meat has become far less common as dog ownership has increased. There is one notable exception: during the Summer Solstice Dog Meat Festival held yearly in Yulin, a city in Southern China. Last year, the BBC reports, some 10,000 dogs were slaughtered and eaten during the highly criticized festival. Such numbers are obviously difficult to confirm.

The growing Chinese pet industry
Based on my conversations with veterinarians in China, the pet industry is growing quickly. I estimate that there are now around 28 million pet dogs and 11 million pet cats. Of course this does not include stray cats and dogs. Just a few years ago, Chinese vets said they would only see about 95% dogs and 5% cats. Now cats represent about 30% of their patients.

The number 1 breed we saw during our visit is the poodle. Most dogs were small or medium sized. In Beijing, large dogs are not allowed, or you risk paying a fine.

The pampered dog
In Shanghai and Beijing, a more and more common sight is a pampered dog, considered part of the family. Veterinary clinics are now commonplace. The clinics (admittedly, we visited some of the nicest ones in Shanghai and Beijing) were overall well equipped. They had digital X-ray machines, ultrasound, blood analyzers etc. The fanciest clinic we visited in Shanghai even had an MRI! The only other MRI in China is in Beijing.

We were invited to consult on a few patients, and even though there was an obvious language barrier (I had a translator), the people I met clearly loved their dogs immensely. One of the surprising sights at several clinics and the veterinary school in Beijing were large rooms strictly dedicated to pets receiving IV fluids. While the fluids slowly trickle in, pet parents are allowed to stay with their pets in small booths.

The developing veterinary medicine
Unfortunately, many were saddened when they heard that virtually nobody in China could perform the surgery their pet needed.

For example, because I’m a surgeon, I was asked to give an opinion on several pets who were in pain or paralyzed because of a slipped disc. Sadly, to my knowledge, nobody can perform spinal surgery at this point in China. Clearly, this will change over time. Until then, well-off clients have to fly their pet to another country.

Overall, my visit to China was a never ending series of surprises. I realized that there is one thing that is universal and does not seem to change much across the world: people’s love for their pet. And in a world of chaos and uncertainty, that’s a reassuring thought for mankind.