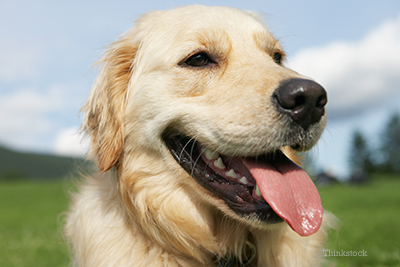 A new, groundbreaking study will evaluate 3,000 Golden Retrievers throughout their lifetimes. The study is being run by Dr. Rod Page and Colorado State University.

How is the study being funded?
According to Sue Manning of StarTribune.com, this Lifetime Study is being financed (to the tune of 25 million dollars) by the nonprofit organization, Morris Animal Foundation. Representatives from this organization believe that the review of health conditions and environmental factors facing Golden Retrievers can help other breeds and even people, because humans carry 95 percent of the same DNA1.

How will the study work?
Dr. Page and his team will collect and evaluate lifelong data from all 3,000 dogs. Factors such as nutrition, exercise, behavior, genetics and environment will be evaluated in conjunction with the evolving health of the participants2.

Family veterinarians located all over the United States will collect blood, stool, urine, hair and nail samples annually for testing3. The results may uncover an early warning sign or common abnormality amongst the dogs that develop cancer or other illnesses. The dogs will also be monitored for changes in temperature, blood pressure, diet, sleeping patterns and energy levels.

The goal of the study is to gain an understanding of why the lifespan of this very popular breed has grown shorter over the years and why cancer has become so prevalent. More than half of Golden Retrievers develop cancer, and it is the leading cause of death in dogs over two years of age3.

How will study results be reported?
Some tests will be run immediately and the results made available. Other data will be banked for future analysis. Dr. Page has stated, “The questionnaire data actually is analyzed on a running basis every six months. Our goal is to share the findings as quickly as possible, once we feel comfortable that the statistics support a solid trend. We want to have positive impacts on animal health not only in the future, but also for our patients today2.”

Initial exams of the study dogs showed that 33 percent had skin disease or ear infections, 17 percent had gastrointestinal maladies, and 11 percent had urinary disease1.

About the Golden Retrievers
The Golden Retrievers involved in the study reside throughout the United States and all were under two years of age at the time of enrollment. They are all purebred dogs with a three-generation pedigree. Dr. Michael Lappin; who practices in Buzzards Bay, Massachusetts; has 19 patients enrolled in the study. When he graduated from veterinary school in 1972 the life expectancy for a Golden Retriever was 16 to 17 years. Today, it’s nine or ten years1.

Who is dog number 3,000?
A suburban Chicago dog named Chloe was recently enrolled as dog number 3,000, and is the last dog to be included in the Lifetime Study. When Chloe’s human companion, Meredith Walters, heard about the study, she didn’t hesitate to enroll her pup. Her Golden Retriever, Amber, passed away from cancer and Cushing’s Disease at age 13. Walters said, “My hope is that this study will uncover data that will lead to information on why Golden Retrievers, in particular, are susceptible to cancer2.”

Every person participating in this remarkable research is hopeful that the key to the Golden Retriever’s shortened lifespan will be uncovered. The study’s ultimate goal for the future is the restoration of more “golden oldies.”