Caramel: An Amputee That Made Me a Cat Lover

Can I make a confession, Dear reader? I have always been a "dog person." I never really understood cats until.... 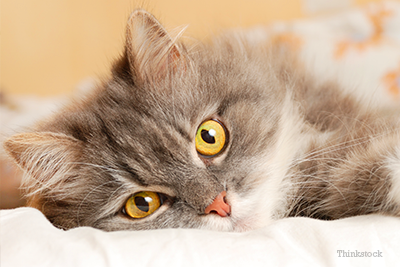 One day, a skinny, matted and scruffy middle-aged cat made me change my mind. The poor cat had been at a nearby shelter for a while. A shelter volunteer brought her in because she had been viciously attacked by a shelter dog, even though she was in her cage! X-rays showed about 15 fractures in one of her front legs! Of course, fractures can be surgically repaired with pins, plates and screws, but virtually every bone in her leg was shattered.

The most reasonable choice was to sacrifice the leg. Surgery went well and the cat was up and walking on three legs the very next day (a common observation after leg amputation). She would rub her head against the cage door, wanting attention and purring constantly! This sweet little cat melted my heart, so I decided to call the shelter and adopt her. And this is how I ended up with my first cat, which I named Caramel, because of the color of her highlights.

My amazing cat
Initially, Caramel was scared and didn't trust me much. She was even aggressive at times, especially when I had to force antibiotics and pain medications down her throat. After a few weeks of patience and TLC, she eventually came around and began to trust me.

Even though she only had three legs, Caramel quickly became very active. She didn't seem to be held back at all by her “handicap.” Once she was completely healed and came out of postop confinement, she started to run around and jump on furniture.

I had never had a cat, so I was amused watching Caramel as she ran through my apartment, like a maniac, after using the litter box. She became obsessed with drinking water from the bathtub faucet. My little amputee was able to delicately walk along the narrow edge of the bathtub to get to the faucet, which was soon left on to drip constantly. Over the following weeks, once she started grooming herself and eating a balanced diet, she began looking better and better. My “tripod” became a beautiful cat. And she became the first of several cats I rescued.

3-legged cats can have great lives
Many clients get upset when I tell them that their pet needs a leg amputation, usually because of cancer or severe trauma. They think of themselves, hoping on one leg – forgetting that pets can function well on 3 legs. They convince themselves that their pet won’t be able to walk, run or play. In reality, animals adapt amazingly well to most any situation.

If your pet ever needs an amputation, please don't think that it is the end of the world or a cruel thing. They just want the pain to go away. Surgery and proper pain medications can help achieve that. Amputees really can live happily, as my first cat did!