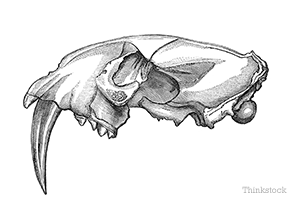 A new study published in PNAS shows that in addition to the internet, cats might rule the world (or at least did at one time). According to the study, researchers discovered prehistoric dogs and cats had to compete when it came to food and as it turns out, cats were the better predators.

The role of evolution
The research team was made up of scientists from universities in Sweden, Brazil and Switzerland, they realized the competition to find food played a pretty important part in the evolution of canine lineage.

The better predators
While both dogs and cats were natural predators, cats were apparently better at it. The sassy felines thrived while 40 different canine species went extinct, reported Max Knoblauch of Mashable.

How did dogs survive?
Even though the cats won the battle, there were some tough canine contenders in these ‘hunger games.’ Species such as wolves and foxes held their own against the kitties and became the dogs we know today. However, their survival didn’t upset the survival rate of the cats, said Knoblauch.

So the next time you’re eating in front of your cat, just remember that competition can be fierce.

Here are 5 similarities proving big cats are just like ours >>