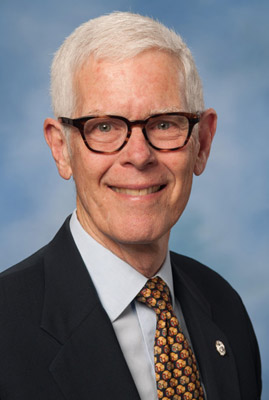 Dr. Tony Buffington is passionate about enhancing the human-animal bond. He believes animals are good for people and it’s good for animals when people and animals understand each other. He has spent much of his career focusing on the effects of the environment on health in pets and believes that if veterinary caregivers can help people understand animals, euthanasia can be avoided. Dr. Buffington has studied the entire range of environments from boring to chaotic, and has concluded that the health impacts of the environment are significant.

“If we are going to assert the authority to confine animals, then we have to accept the responsibility of doing it in as enriched a way as possible,” said Dr. Buffington. “Some incidences of heart disease, dental disease, gastrointestinal disease, kidney disease, thyroid disease, obesity and diabetes in cats appear to be significantly impacted by environmental factors as they are overrepresented in confined animals.”

Dr. Buffington developed the idea that the environment was contributing to cats’ health issues, in particular urinary tract problems, while a professor at Ohio State University. During his time there, 200 cats were donated to his program and often the animals came in with multiple health problems including urinary issues. Over time, he observed that once the cats were acclimated to the enriched cat colony at the university, their urinary issues subsided. In fact, after 6 months, observers couldn’t tell the difference between the donated cats and the healthy control cats.

One of Dr. Buffington’s most significant findings is that insufficient or excessive stimulation of the perception of threat in a cat’s environment can cause the cat’s health to suffer. Once a cat’s perception of threat exceeds their perception of control, physical and mental health can suffer. It’s important to try to give the animal a sense of control by giving the cat choices and providing opportunities for her to express species typical behavior. It is also important to figure out what your cat may feel threatened by and eliminate it.

Basic things about normal cat behavior that Dr. Buffington would like everyone to know:

Many of Dr. Buffington’s directives for understanding cat behavior and enriching their environment can be found on the Indoor Pet Initiative, a website hosted by Ohio State University. The goal of the site is to enhance the health and welfare of companion animals world-wide so that all pets and their caregivers can experience optimal well-being and thrive in their environments. This goal is accomplished by giving caregivers the information needed to create an environment that permits pets to thrive.

Environmental enrichment involves manipulating an animal's environment to increase physical activity and species typical behavior. This type of enrichment can help reduce stress and promote overall health by increasing an animal's perception of control over their environment and by occupying them. Techniques utilized to enrich an environment include:

According to Dr. Buffington, “If you are sure that your cat is experiencing an enriched environment you can rule out the environment as a factor in their behavior and know that they are really sick. So if they are vomiting it’s because they have a foreign body or a stricture, not because the kids just came home from college, or the neighbors just got a dog.”

Dr. Buffington has written an eBook called “Cat Mastery” to help cat owners evaluate their environment on their own. He is interested in helping cats and animals by providing information on creating “fear-free” homes, so that everybody who has a cat has a basic understanding of how cats behave, and how they work, so they can both enjoy each other a lot more.

“I am interested in preventing and predicting problems,” said Dr. Buffington. “My view is that appropriate environmental enrichment is as important as vaccinations and satisfactory nutrition for prevention of illness.”