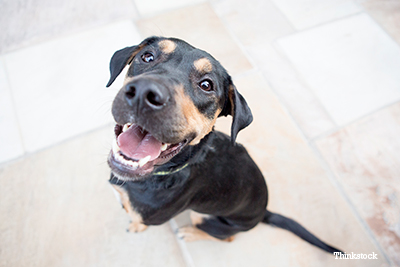 Dr. Justine Lee's specialty is pet poison prevention, and in this blog she discusses some of the most dangerous toxins for dogs. For more from Dr. Lee, find her on Facebook!

This week, it's National Poison Prevention Week, marking over five decades of safer homes and saved lives… for both the two-legged and the four-legged! Last week, we tackled the five common canine toxicants in Part 1. In today’s blog, we’ll cover the remaining five, including insect bait stations, cold and allergy medications, antidepressants, xylitol, and acetaminophen (Tylenol).

Insect bait stations
You know those little plastic bait stations that you have around the house, sitting in the corners of your floor? Unfortunately, both dogs and ants like to get into the bait, thanks to the bait attractant inside (typically peanut butter-based). Thankfully, these ant and roach bait stations are rarely toxic, but they are a common cause for calls to Pet Poison Helpline (an animal poison control center based out of Minneapolis, MN) due to frequent ingestion by dogs. (Cats typically just bat these bait stations around and play with them, but rarely ever chew them up). Thankfully, these bait stations have a wide margin of safety and are minimally toxic, as the active ingredient is often a low-concentration of insecticides that are commonly used in veterinary medicine. The plastic on the bait station is more of a problem, as it can result in gastrointestinal (GI) signs or potentially foreign body obstruction (FBO), when ingested in large amounts. When in doubt, put them in places where your dog can’t get into them (e.g., behind the stove or refrigerator).Cold and allergy medications
Cold and allergy medications typically contain large amounts of acetaminophen (which is Tylenol), decongestants (e.g., phenylephrine, pseudoephedrine), and antihistamines (e.g., diphenhydramine, loratadine, etc.). While we use antihistamines in dogs with allergies, it’s the other ingredients that can be deadly to your dog if accidentally ingested. Most importantly, pay attention to the name of the drug: for example, Claritin is safe to use in dogs and cats, but Claritin-D (“D” for decongestant) is potentially deadly (I always remember this as “D” for “deadly” for pets!). When ingested by dogs, signs of a racing heart rate, abnormal heart rhythms, high blood pressure, tremors, seizures, and death can be seen.

Antidepressants
The use of antidepressants is very prevalent in North America and these drugs are one of the top medications prescribed by medical doctors. While some of these medications are used for animal behavioral problems (e.g., like canine separation anxiety or inappropriate urination in the house), they can be dangerous when ingested in poisonous amounts. When accidentally ingested by dogs, signs of antidepressant poisoning include hyperactivity, a racing heart rate, hypertension, dilated pupils, tremors, and even seizures.

Xylitol
Xylitol is a natural sweetener found in small quantities in certain fruit. It has gained recent popularity because of its dental plaque fighting properties (for humans) and very low glycemic index and is now found in almost anything sugar-free! Some sources of xylitol include:

When dogs accidentally ingest toxic amounts of xylitol, it can cause a low blood sugar (with signs of hypoglycemia like vomiting, collapse, weakness, walking drunk, etc.) and even liver failure. When in doubt, keep gum and mints out of reach!

Acetaminophen (e.g., Tylenol)
Did you know as little as one Tylenol can kill a cat? While dogs aren’t as sensitive to Tylenol as much as cats are, it can still be poisoning when ingested. Tylenol contains the active ingredient, acetaminophen, which is a common anti-fever medication used in humans. Unfortunately, when accidentally ingested in pets, it causes liver failure, abnormal red blood cells, lack of oxygen, and even eye changes (dry eye).  Thankfully, there’s an antidote for Tylenol poisoning called n-acetylcysteine, but this should be started as soon as possible!

The best thing you can do during National Poison Prevention week is to know what household items or medications pose the biggest dangers to your dog or cat. Take the time to pet-proof your house to avoid accidental poisonings to your pets. Next week, some hints on how to pet-proof each room in your house.

If you think your dog or cat may have ingested something harmful, take action immediately. Contact your veterinarian or an animal poison control center for life-saving assistance. After all, the sooner and faster you recognize the poisoning, the better the prognosis for your dog!