Posts by:
Dr. Justine A. Lee, DVM, DACVECC
Does your local pond have this common, deadly algae?
Dog Toxins & Poisons 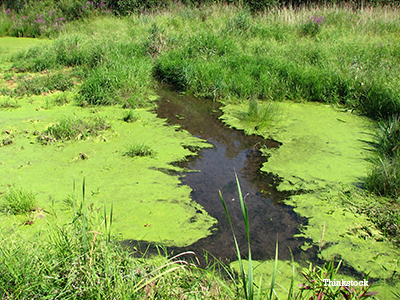 Maybe I’m just a bit paranoid, but when it comes to swimming in lakes, you want to make sure to avoid ones that have that green-scum layer on top of the lake. Why? It’s because during really hot summers and the fall, there’s an increased likelihood of the lake developing a thick “bloom” of algae that floats on the surface. So, why do I worry about algae as a toxicologist? I worry because of blue-green algae.

What is blue-green algae?
Blue-green algae, which is also called cyanobacteria, is a microscopic bacteria found in freshwater ponds, lakes, streams, and brackish water ecosystems. Note that not all types of algae are poisonous, but some types (e.g., blue-green) can produce toxins called microcystins and anatoxins. These toxins are so dangerous that they are actually poisonous to other species too: humans, cattle, horses, cats, etc. For this reason, you shouldn’t allow your dog (or child) to swim or drink water that has been potentially contaminated with blue-green algae.

With blue-green algae that produce anatoxins, symptoms include:

How do I protect my dog from blue-green algae?
While it’s impossible to be able to tell if it’s benign or poisonous algae on the pond or lake, it’s best to heed caution and avoid allowing your dog to swim in any body of water that has visible algae on the surface. That’s because even small exposures (as little as 1-2 licks), can potentially result in fatal poisoning.

I advise that you stomp around any lake before you let your dog dive in, and make sure to avoid it if it has blooms of algae floating on the surface.

My experience with blue-green algae
The last case of blue-green algae poisoning that I treated was also the saddest. It was a dog that had never been out to a lake, but he ended up dying of liver failure. The cause? The owners left a used, old, empty fish tank out on the deck. Over months, it accumulated rain water. One day, the dog drank out of this moldy, algae-filled tank, and unfortunately was accidentally poisoned by blue-green algae.

Make sure your dog always has a bowl of fresh water available so he or she isn’t tempted to drink from contaminated sources.

With any poisoning, the sooner you seek treatment the better the prognosis. With blue-green algae, immediate veterinary attention is important. When in doubt, you can always call your veterinarian, emergency veterinarian, or ASPCA Animal Poison Control Center for life-saving care at 888-426-4435.