Labrador Must Have Kidney Removed after Blockage

One evening, Lexie’s guardians, John and Jill, came home to their 10-year-old female Labrador. Instead of greeting them at the door, tail wagging and happy to see them, Lexie was not at the door. She was in the kitchen, whimpering and unwilling to get up. She clearly hadn’t touched her food bowl. An hour later, Lexie was in the ER. The emergency veterinarian performed a physical exam which revealed consistent belly pain.

Blood work showed that she might have kidney problems. A urinalysis revealed a urinary infection. Lexie was kept on IV fluids and antibiotics overnight.

A urinary infection didn’t seem that bad, so Lexie’s guardians went home alone, but somewhat reassured. An ultrasound was scheduled for the next day. 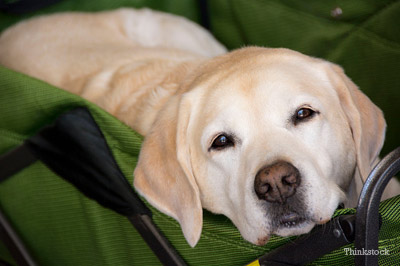 Ultrasound reveals kidney problem
The Doctor who performed the ultrasound called after the test and explained the problem:

“Lexie’s ultrasound revealed that everything is fine in her belly except for one single problem. Lexie has an enlarged, infected kidney. This is due to a blockage by a stone in the ureter.”

“So if you remove the stone, will she be OK?” asked Jill anxiously.

“Removing the stone is necessary, but we cannot leave an infected, abscessed  kidney in Lexie’s belly. It has to be removed,” explained the Doctor.

Her eyes welling up, Jill asked “will she be OK with only one kidney?”

“Based on my ultrasound, her other kidney seems in good shape, so yes, I do believe she will be fine.”

Lexie’s kidney surgery
On the same day, the clinic’s board-certified surgeon performed surgery on Lexie. The kidney and its ureter were removed. Samples were sent to the lab for biopsies and a culture. After surgery, the surgeon reassured John and Jill that everything went well. He confirmed that a stone had blocked the ureter and caused all of the problems that were found.

Lexie was lucky that she had a benign condition in her kidney. A kidney may need to be removed for several reasons, including trauma (for example after being hit by a car), benign or cancerous tumors, and various causes of kidney enlargement. In Lexie’s case, the enlarged kidney is called hydronephrosis.

After Lexie’s kidney surgery
After surgery, Lexie was closely monitored overnight. The next day, she looked much brighter and started to show interest in food. And the day after that, she went home, tail wagging and all. She was kept on pain medications and antibiotics. She had to wear an E collar (plastic cone) around her neck for two weeks, and had to be confined for one month. Keeping her on a leash every time she went outside, John or Jill could observe her urine. Its color needed to go from reddish to pinkish to yellow over a few days.

[Check out 'What Does Your Dog’s Urine Color Mean?']

About a week later, the kidney biopsy and the culture all confirmed the doctors’ suspicion. The kidney values became normal on recheck blood work, which confirmed that the remaining kidney was functioning adequately.

Despite the initial scare, Lexie made a complete recovery.

[Editor’s Note: Since advances in veterinary medicine and surgery are ongoing, you may always ask your veterinarian if any of them might help your pet. Explain that you want to discuss all the possible options for diagnosis and treatment.]

Questions to ask your vet if your dog has kidney disease: