Can Neutered Pets Still Have Sex?

When you think about Valentine’s Day most people think about love, but this story is more about libido and lust.  Luckily, unlike most stories of uncontrolled animal instinct, this one has an ending and a moral that will make many people, especially men, happy.

It was a seemingly ordinary day in August and my friend and dog class co-instructor was visiting with one of her foster dogs, a little black and tan Chihuahua mix. She’d just gotten the dog and the previous owner had stated that the Chihuahua had been in heat several weeks before but was out of it now. Well, according to my neutered Jack Russell Terrier Jonesy, she was still ripe and ready for picking.

Just as a backgrounder, Jonesy historically likes to try to hump every visiting female and some neutered male dogs who smell pretty. And he knows this X-rated behavior is not allowed. So sometimes he’s covert about it. If he looks interested I’ll call him over and have him lie down which he’ll do willingly, but when he thinks I’m not looking, he gives them amorous looks, sidles up next to them and attempts to hop on.

Now for those who quickly jump to the conclusion that his behavior must be “dominance,” let me clarify.  Jonesy always backs away when these dogs if they snap at him rather than attacking them like he would if his mounting were a sign that he was trying to establish higher rank. Additionally, he exhibits his frat-boy behavior even when the female is definitely higher ranked than him and he knows she can kick his butt.  So his mounting behavior is driven by his libido. In some dogs this mounting can also be a displacement behavior, like nail chewing or twirling their one’s hair, that is performed when they are anxious in social situations or socially inept.

Usually I watch Jonesy like a hawk because it’s bad form to let him practice this rude behavior. In this particular situation I wasn’t paying close attention because Melissa and I were focused on work and because even when Jonesy does try, after several jilted attempts he usually stops. But this time, just several minutes into the visit we suddenly heard a piercing yelp.  Like something really bad had just happened. And it had! Jonesy and the visitor had mated and were tied. 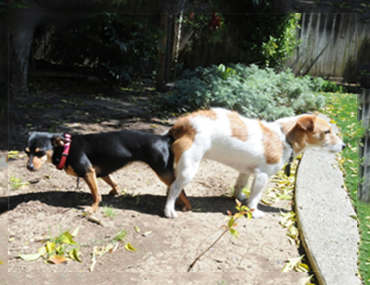 The yelp had come from Jonesy! He thought he had struck gold, when for once, a female had held still for him—because she WAS in estrus. But then, as Jonesy found out, the part after that wasn’t fun. After the male ejaculates his sperm, a bulbourethral gland in his penis gets large. As a result males cannot remove their penis immediately. So they step over the female with their hind leg so that they are butt to butt still connected by their reproductive apparatus. The purpose is to help the males sperm stay in the female’s reproductive tract so that they can get a fighting chance to swim and meet her eggs. Ties can last 30 minutes.

Luckily for Jonesy, it only lasted 5-10 minutes for them. And when they were done, he checked himself to make sure his equipment was still there. It was, so in the future, if he wants he’ll be able to try again.

Your Neutered Dog Can Still Have Sex
You’re probably wondering, where’s the happy ending and the positive message? Well, for those of you who are afraid to neuter your pet because you’re sad he’ll never have a chance to mate, you can nix that excuse off your list. The take home message here is that your neutered dog can still have sex. If he wants. Most likely he won’t want to. With the lower testosterone levels he won’t have a huge libido.

But neutering  and the resultant low testosterone doesn’t remove all sexual behaviors. That’s because the circulating testosterone in young puppies causes changes that permanently masculinize the brain. These changes lead to increased urination on vertical surfaces, increased exploring of the environment, and clearly in some cases increased mounting and even mating of dogs who are in heat.

Luckily Jonesy had been neutered for 5 years at the time of this event, so he was in the clear in terms of having babies. In other words, the second happy ending here is  that he basically had safe sex—although he’d need a condom to prevent transmission of infectious diseases.  For dogs who have recently been neutered it can be a different story. Sperm are created and stored in the testicles but they can live for some time in the plumbing that leads to the outside. So the general rule for neutered males, is to keep them away from females in heat for 30 days.

Incidentally neutered male cats can still go through the motions of mating too. Says one of my employees who has such a cat: “yuck.”