What is a Dog Ear Hematoma?

Dr. Phil Zeltzman is a traveling, board-certified surgeon in eastern Pennsylvania and Western New Jersey. His website is www.DrPhilZeltzman.com. 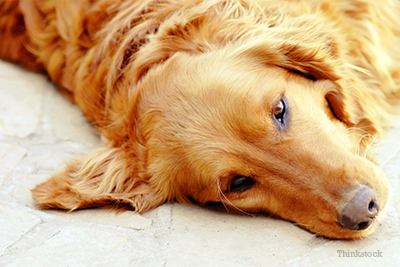 Henry, a 6-year-old Golden Retriever, went to the veterinarian to have his ear checked out. His guardian described the ear over the phone as having a giant blister, “the size of a lemon.” Henry's guardian also noticed that his dog had been shaking his head and scratching his ear for the past few weeks.

A full physical exam revealed that there were actually two issues: a “puffy ear,” and a nasty ear infection. An ear exam with an otoscope (a magnifying glass with a powerful light) showed a build-up of waxy, smelly, brown debris, which indicated an ear infection.

Ear infections can have multiple causes, including:

Dogs and cats will scratch their ear, rub it on objects or shake their heads to relieve the stubborn itch.

Diagnosing a dog ear hematoma
The diagnosis became clear: Henry first had an ear infection. This caused itching, which our canine friend tried to appease by shaking and scratching. Trauma to a small blood vessel made it bleed under the skin of the ear. The blood then accumulated between two layers of cartilage, inside the ear flap. A simple needle test confirmed that the giant squishy blister contained blood: a classic ear hematoma.

Treating a dog ear hematoma
Without treatment, the hematoma may heal on its own after the fluid is slowly reabsorbed by the body, but it may very well scar down and turn into an ugly looking “cauliflower ear.” There are multiple ways to treat an ear hematoma, but it always requires a two-part treatment. Think of the blood blister as the tip of the iceberg. If we only treat that, we might miss the boat.

The first critical part of treatment is to treat the ear infection, which is the root of the problem (the bottom of the iceberg). This may involve an ear cleaning under anesthesia, followed by antibiotic drops or ointment placed into the ear canal.

The second part of treatment is to treat the actual ear hematoma. There are several ways to achieve that, and every veterinarian may have a favorite option. Treatment options include:

Most of these options involve making one or several incisions inside the ear flap, removing the hematoma and suturing or stitching up the skin. This last option (surgery) involves placing stitches through and through (from the inside of the ear flap to the outside). Sometimes, a bandage is placed around the ear and the entire head.

Recovering from a dog ear hematoma
In addition to medications that treat the ear infection, pain medications and oral antibiotics may be dispensed. Importantly, a plastic cone (E. collar) should be worn at all times to prevent the patient from continuing to scratch the ear or rubbing it against the floor or furniture.

Ear hematoma outcome for Henry
Ear hematomas can be quite frustrating to treat, but as long as the ear infection is taken into account, we can reach a successful and cosmetic outcome.

Henry’s hematoma was so large, that surgery was chosen as the best solution for him. The hematoma was opened up and multiple stitches were placed around the ear flap. A treatment was also started to treat the ear infection. Three weeks after surgery, the sutures were removed and Henry made a full recovery.